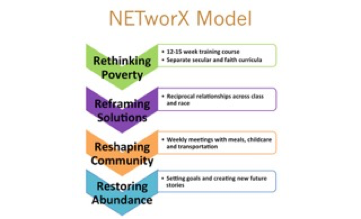 EDITOR’S NOTE: This is the first in a series of articles on how UM churches in our conference are implementing Circles and NETworX initiatives and continuing to thwart poverty—especially during this pandemic.

“This is so much different than all the handout type approaches common in most of our churches,” states Rev. Robert Jennings-Teats, retired pastor of the California-Nevada United Methodist Conference. In 2005, as chair of the Conference Committee on Children and Poverty, Jennings-Teats helped establish five “circles model” poverty initiatives within the conference. The pilot program, entitled Capital City C.I.R.C.L.E.S.”, was started at Carson City UMC where Jennings-Teats was the pastor. “It is also labor intensive and requires strong lay and pastoral leadership to make it happen. This is serious stuff.”

“This is not a typical social service program,” states Rev. Maggie McNaught, current pastor of Carson City UMC and secretary of Capital City Circles. “It’s a cooperative community effort to elevate people out of poverty by intentionally creating relationships across class lines, and empowering people in poverty to chart their own course toward self-sufficiency.”

The circles initiative involves recruiting and assisting generational poor people to achieve goals they set for themselves with the support and encouragement of a community of people from other classes linked with them during in a 2-3 year program. The program involves practical and inspirational training events and weekly community meetings with food, childcare and transportation provided.

“We were experiencing great success and were reporting an 80% success rate among our participants,” states Jennings-Teats. Carson UMC invited more than 50 congregations across the conference to an orientation to share their stories. The event resulted in communities in Napa, Fresno, Elk Grove, Auburn, Livermore and Watsonville becoming involved and setting up initiatives under the leadership of the Carson City.

“NETworX is based on the Methodist movement,” states the national website citing its’ acronym of Nurture, Education and Transformation being within a network of Christian origin. “[to serves as] a ‘ladder of opportunity’ for those experiencing poverty. Weekly classes, accountability, and relationship building [which] were the core of the Methodist movement and are at the core of the NETworX initiative.”

“Walking with the poor is a real thing,” states McNaught who volunteers at the local shelter as part of her personal faith walk and, in an official pastoral role, is one of the supportive “allies” with NETworX . McNaught joins a co-hort every six months to meet a new group of “champions” (heads of households) who will begin “Phase 1” to train together and set goals. Then, the cohort will move forward into “Phase 2” where goals are achieved--all the while meeting weekly for dinner. A cohort can be up to 12 families with 12 allies.

During the pandemic, the program continues except that meetings are online and there are no weekly meals together. Some training events are held online while those requiring in-person training have been temporarily suspended.

The current total budget of all five active NETworX communities combined is $750,000 with seven full-time employees, enlisting 20 congregations and more than 50 community organizations.

“Even with COVID, all of our initiatives [across the conference] have been active and continue to work with participants to reach their transforming goals,” states Jenning-Teats. “I believe those congregations involved in NETworX are really making a difference in the lives of the people they are working with.”