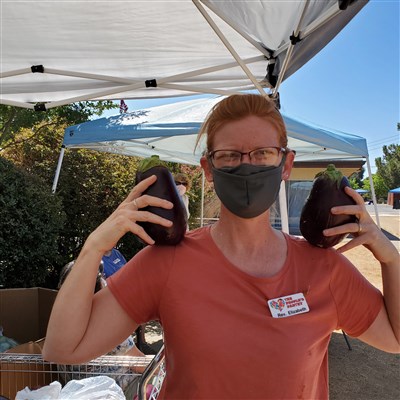 The small yet mighty faith family at Rancho Cordova UMC felt called to do more to help their community.

After praying, dreaming, and scheming about ways that they might expand their witness, a team from Rancho Cordova approached the Sacramento Food Bank about becoming a distribution site.  Initially their goal was to gain access to the Sacramento Food Bank to augment ongoing feeding ministries at the church. Yet, before they knew it the doors flew open, commitments were made, trainings happened and The People's Pantry was birthed. Today, The People's Pantry is a once-a-month large scale distribution site - servicing between 80 and 100 families, 350 individuals, each month.

The food is abundant. In July each family received six bags of groceries which included canned goods, soups, pastas and sauces, fresh meat, fresh eggs, fresh milk, fresh fruit, and fresh vegetables all supplied by the Sacramento Food Bank. They also offered fresh produce grown in the church garden. In this year alone, Rancho Cordova's garden has yielded 1500 bags of produce - tomatoes, squash, onions, herbs, and melons. With a goal is to distribute 2000 bags by the end of the year, the team is well on their way to exceeding that goal.

In addition to working with the Sacramento Food Bank on the once monthly People's Pantry, the team at Rancho Cordova has begun to prepare for additional food support specifically for senior citizens and are working in partnership with the Sacramento Unified School District to distribute meals to children and their families.

Stemming the tide of the pandemic is also a priority for Rancho Cordova UMC. When Sacramento County reached out to Rancho Cordova and asked that they become a vaccination site the team opened their doors. On July 20th Rancho Cordova hosted their first vaccination clinic, which was staffed by the National Guard and county medical personnel. Between 50-75 people including those with advance appointments and walk in's were vaccinated. Rancho Cordova will host the free clinic every two weeks.

The team at Rancho Cordova are good stewards and make sure nothing goes to waste. When groceries remain from the monthly People's Pantry they are given to the 100 or so folks that attend Rancho Cordova's "Be Our Guest" sit down community dinner, which was adapted to a "Drive in and Take out" dinner during the pandemic.  And, if there is still remaining food Rancho Cordova shares it with other distribution centers in their area.

Although The People's Pantry originated as a ministry of The United Methodist Church of Rancho Cordova, it is staffed by people from St. Clement's Episcopal Church, The Rancho Cordova Baptist Church, and the Rossmore Ward of the Latter Day Saints Church. The churches and their combined communities, most especially seniors and youth, continue to bring vitality to this feeding ministry.

​Civic and ecumenical collaborations have helped make Rancho Cordova's vision and passion for feeding the community a reality.

Eventually, the faith family at Rancho Cordova hope to do the vital advocacy work that will eradicate hunger and homelessness in all of their communities.