Sifting through the ashes 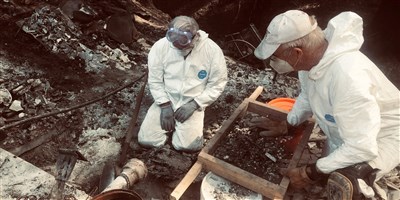 Editor's Note:  California-Nevada Disaster Response Ministry Director Sonja Edd-Bennett was among sources of information and images for this story for Global Ministries / UMCOR.

Henry* made a life choice to live off the grid in Northeastern California. He owned a piece of land in the Plumas National Forest, northwest of Reno, Nevada. At 71, he was still spry and healthy. He could take care of himself, and he lived with his cat in a trailer on his land. He had solar panels and propane for energy. He paid no bills and, except for Social Security, had no attachment to any public agency. That was just the way he wanted it, the way he’d planned his retirement.

That is, until three major wildfires engulfed the Plumas National Forest area in August this year. Henry lost everything, his trailer, his car and everything on his land. He made it out with only his cat and hitched a ride with someone leaving the burning forest.

Sonja Edd-Bennett, director of Disaster Response Ministry for the California-Nevada Conference, says Henry stopped by the UMCOR/California-Nevada response table at one of the local assistance centers set up to help wildfire survivors of the Plumas fires.

“His story really sticks with me,” Edd-Bennett said. “He said: ‘I’m sitting before you, a 71-yr-old man, homeless, with nothing more than a cat and $865 a month in income. I never thought I would be homeless at 71.’ He was living in a borrowed car.”

“These are mountain people,” she continued. “There are a lot of people in Northern California who live as multiple generations on the land. They live in nontraditional housing, a trailer or an out-building, or sometimes even a tent in the backyard. If that structure does not have a permit and was not assessed by a tax assessor, then it is not eligible for government relief funding.”

Henry paid taxes on the land he owned, but he did not have a permit for the trailer as his residence. He did not qualify for FEMA assistance because he didn’t have a building and his address was only the road.

“We anticipate we will see a lot of people like Henry in Butte County,” Edd-Bennett explained. She said her biggest concern is for those people who live off the grid.

Christie R. House is a consultant writer and editor with Global Ministries and UMCOR.
Share