Fire Sifters: A story of building and sharing fire recovery tools across our UMC connection 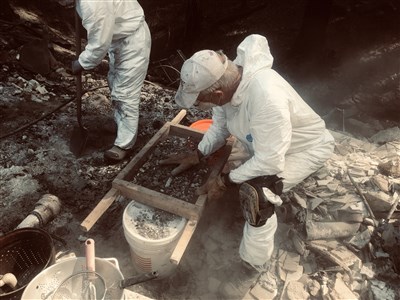 Volunteers sifting for valuables after the fire.

Editor's Note: California-Nevada Director of Disaster Response Sonja Edd-Bennett shares a story about our UMC connection works together to build and transport sifters to areas ravaged by wildfires.

In fall of 2020 I attended a meeting of the Western Jurisdiction (WJ) Volunteers in Mission (VIM) leaders and Disaster Response Coordinators while responding to the CZU fire.  During that meeting there was a mention of VIM teams in the Desert Southwest (DSW) Conference that were building ash sifters. The teams had sent several of the sifters to the California-Pacific conference and there will still a few churches within the DSW committed to building more. Ronda Cordill, the WJ VIM Coordinator connected me to the VIM Coordinator for DSW, Mike Eyer, and plans were put into motion to provide California-Nevada with at least 150 sifters.

Mike's church, Spirit of Hope UMC in Peoria, AZ, held a Saturday event in November and 24 volunteers put together 126 sifters. Two other churches held events as well and completed another 76 sifters.

Considering the distance between AZ and Northern California, arrangements needed to be made to actually transport the now 202 sifters to a place where California-Nevada volunteers could retrieve them.

It so happened that Mike’s son lived in Pasadena and Mike and his wife had a couple of visits planned, so he made arrangements with the Pasadena First UMC to store the sifters until we could pick them up – potentially a month or so. In March and again in April, Mike loaded as many sifters as he could fit in his SUV and dropped them off at Pasadena First.  Aisha, the facilities manager in Pasadena, stored the important gift in a safe place and made herself available for regular communication to arrange for their pick up.

On Memorial Day weekend, California-Nevada's  Early Response Team Coordinator, Leslie Carmichael, arranged to borrow the cargo van from Los Alto UMC’s ministry, Hope’s Corner. Leslie and I made our way to Pasadena where we loaded all 202 sifters into the van (with some help from the Pasadena Youth Group), caught a quick dinner and some sleep, and headed back the next day.

The sifters are currently stored at the Holy Cross UMC in Stockton where they will be held until needed by those in areas affected by wildfires in the Western Jurisdiction.