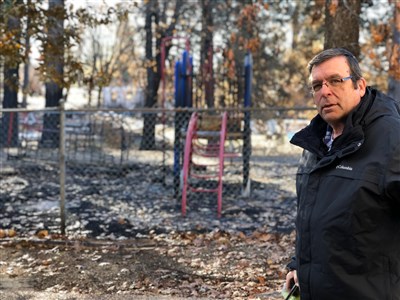 Just slightly more than a month after being evacuated, Pastor Bob Chicou and Administrative Assistant Patty Wall were able to return for 30 minutes to Paradise United Methodist Church to view the property and collect important papers, a laptop, and worship materials. United Methodist Committee on Relief (UMCOR) Consultant Angela Overstreet and I were allowed to accompany them.

A military escort was required to enter the area and the group was part of a small caravan that included a van full of survivors returning to pick up cars they had abandoned while escaping that horrific day. While it was difficult to see the devastation in the area, the level of hope remained high as car after car was found unharmed and able to be driven out of the area. The UMC group was optimistic as they finally reached the Paradise UMC – and were not disappointed!

The church appeared mostly untouched. We found a partially burned children’s playground, warped outside door, and the smell of smoke could be detected in the sanctuary and a few rooms. We now are considering how the facility might be used in the future, and whether it may be suitable for the conference to use as a hub for recovery efforts in the Paradise area.

Early Response Team members are on site in the disaster zone, helping homeowners sift through the ashes for valuables and memories – walking alongside them, listening, comforting, and demonstrating the love of God through their presence.

Phone calls are being made to follow up with everyone who indicated a desire for that, when they registered with us at the Disaster Recovery Center.

The next few months will include many training opportunities in preparation for ongoing needs. Watch for the training schedule to be posted later this week.