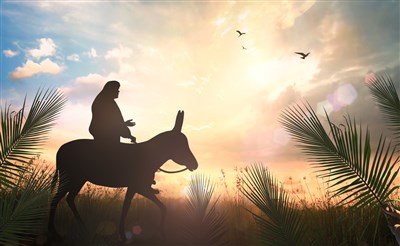 I will have to die for this, I fear
There's rage and terror and there's sickness here
I fight because I have to
I fight for us to know the truth

Jesus’ entry into Jerusalem on the first day of Passover was not an act of joyful celebration but an act of willful resistance. As Jesus and entered the city from one direction, Pontius Pilate was entering the city from another. Pilate’s procession was a glorification of the raw power of Rome, meant to inspire fear and further strengthen Rome’s oppressive subjugation of Israel in the hearts and minds of the citizenry. Jesus’ procession sought to openly challenge the authority of Rome and subvert the narrative that had been created to justify empire.

This is my rally cry
I know it's hard, we have to try
This is a battle I must win
To want my share is not a sin

The people’s cries of “Hosanna!” and “Blessed is he who comes in the name of the Lord!”, are less about being reverential to Jesus than they are about the people rallying themselves around the cause of God. Where the authorities of Rome would consider the people’s cries for justice and equity an act of rebellion deserving punishment and retribution; those with Jesus understand their cause to be unequivocally God’s own.

In the version of the story we find in Luke’s Gospel, Jesus is told by some Pharisees to silence the crowd of people that entered the city with him. It is easy to assume that this is due to the disdain that sect is portrayed as feeling for Jesus. But another, entirely plausible reason, is that the Pharisees recognize the procession as the act of public resistance that it is and realize how dangerous it is for anyone in close physical proximity to it. Jesus refuses to silence those that are with him, and in so doing, refuses to turn aside from the path that he is on. That path will be his trajectory through the week ahead and beyond.

You beat me, betray me
You're losing, we're winning
My spirit above me
You cannot deny me
My freedom is burning
This broken world keeps turning
I'll never surrender
There's nothing, but a victory

As we remember and reflect upon the story of Palm Sunday, may we hear anew its rally cry to stand with Jesus in active and intentional resistance against structures and authorities that seek to wield power against, instead of seeking to empower.

Rev. Mike Harrell serves as the Assistant to the Bishop, Caliornia-Nevada Conference.