No Dough for the Doughboy 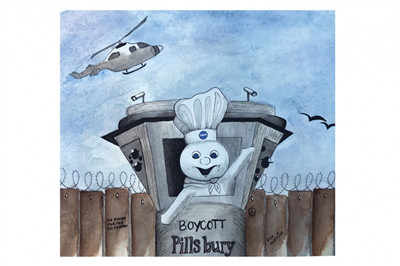 Did you know that Pillsbury, the company famous for holiday dinner rolls, has a factory in an illegal Israeli settlement?  And why is this important?

The 2012 General Conference of the United Methodist Church called on us to boycott products made in illegal Israeli settlements. This was an amendment to a resolution opposing such settlements passed by GC in 2004.

The Israel/Palestine Task Force of the California/Nevada Annual Conference is joining United Methodists for Kairos Response, the American Friends Service Committee, and other people of faith in global boycott of Pillsbury.  And you are invited to join too!

Let's make the bread we break. Try making your own bread, pie crusts or rolls with children or grandchildren.  You can tell them how boycotts helped bring down apartheid and Jim Crow. We’re doing this to help Palestinian children who suffer under the occupation.

Let’s put our United Methodist Social Principles into action and have some fun while we’re doing it.  For more information contact IP.TaskForce@cnumc.org

Gloria Fearn is a member of the California-Nevada Israel/Palestine Task Force.
Share