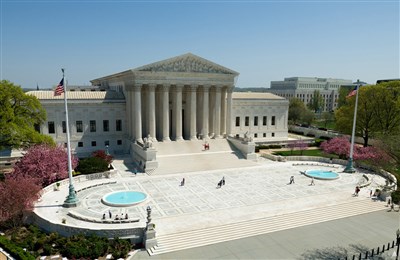 A view of the U.S. Supreme Court, the highest court in the federal judiciary. Native Americans pronounced themselves stunned and happy at a July 9 ruling by the court affirming their jurisdiction over criminal prosecutions of tribe members on reservations in Oklahoma. Photo courtesy of the Architect of the Capitol.

Native Americans, including United Methodists, were jubilant over a U.S. Supreme Court ruling affirming their jurisdiction over criminal prosecutions of tribe members on reservations in Oklahoma.

“I’m excited. I am happy,” said Anne Marshall, councilwoman for the Muscogee (Creek) Nation and member of the Wewoka United Methodist Church in Holdenville, Oklahoma. “The U.S. is going to start having to honor these treaties.”

C. Blue Clark is an emeritus history professor and instructor of law at Oklahoma City University School of Law, and the author of “Lone Wolf v. Hitchcock: Treaty Rights and Indian Law at the End of the Nineteenth Century.”

“It’s astounding!” he said. “Stunning! I assumed that the justices would rubber stamp another anti-Indian opinion, which have been flowing out without cessation since the late 1970s.”

“I’m Muskogee (Creek), and everyone that I’ve seen and talked to … are all excited that this took place,” Deere said.

Many Native American tribes have signed treaties with the U.S. government only to see the courts fail to uphold them, said the Rev. David Wilson, conference superintendent of the Oklahoma Indian Missionary Conference.

“There are 39 tribes in the state of Oklahoma now, probably the most of any state,” Wilson said. “So I would think many tribes are going to be looking at this ruling and seeing how they could take advantage of that.”

The 5-4 ruling, McGirt v. Oklahoma, released July 9, was written by Justice Neil Gorsuch. When he was appointed to the Supreme Court in 2017, Gorsuch had the support of the National Congress of American Indians.

“He’s written Indian law decisions, particularly when he was on the 10th Circuit (Court of Appeals) that show a deep understanding of the history,” said Sarah Deer, professor of Women, Gender & Sexuality Studies at The University of Kansas and a member of the Muscogee (Creek) Nation.

Gorsuch started his majority opinion acknowledging the Trail of Tears, the forced relocation of about 60,000 Native Americans from their southeastern U.S. homeland to land west of the Mississippi River designated as Indian territory. Members of the Creek, Cherokee, Chickasaw, Choctaw and Seminole nations were forced to move.

Disease killed some 4,000 before they arrived.

By treaty, the relocated Native Americans were promised they could keep their new land permanently. Lawyers for the state of Oklahoma argued that more than 100 years of precedent meant that the treaty was null and void.

Gorsuch and four other justices disagreed.