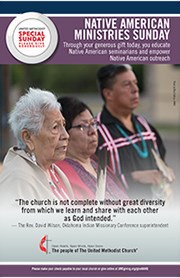 Since then, Native American Sunday funds have been given to provide critical support to match ministry needs at each of the three local UMCs historically serving Native communities.

Round Valley UMC has found new vitality in the 15th year of the CLayM pastorate of Roy Pina (Nomelaki). The oldest of the three churches, initially built in 1858, Round Valley accepts a stipend to sustain communication costs.  Schurz UMC, located on Walker River Paiute lands, receives support for the part-time ministry of a locally-grown leader and pastor, Nathan Sam-Whistler.  Church of the Redwoods UMC, located just outside the Klamath nation’s tribal lands, and served by ClayM pastor Isabel Budinger, receives support for annual insurance costs.

“The needs of each church are unique, so we identified and funded their most critical needs by small grants.  Through these grants we give them some financial relief, so that the churches can focus on being the hands and feet and voice of Jesus in their communities.” said Rev. Jason Thornton, pastor at Manteca UMC and treasurer for The Committee on Native American Ministries, (CONAM).

Saved funds are currently paying the difference between the annual allocations and receipts, the latter remaining remarkably constant for many years. Also supported are education and travel costs for the three Native Pastors. Local ministries benefit from half the funds contributed by local churches on Native American Ministries Sunda , with the other half paying for Native seminary scholarships through the General Board, to help grow indigenous leadership.

“Those old mission days, when the church tended to appoint--and pay for-- young seminary graduates, now are remembered only by the elders,” said CONAM Chair Derrick Rainbow, (Quechan). “But we warmly remember how we felt welcomed as part of a new beginning in 2016,” he said.

“We agreed to serve together and we also agreed that seeking reconciliation together would be a long term goal.  We on CONAM also want to commit to sharing more details about these ministries over the next year to deepen our connection,” Rainbow said.