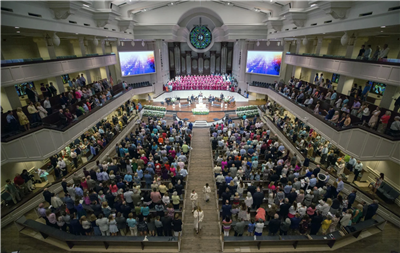 Editorial Note: If you are interested in learning more about the disaffiliation process in California-Nevada, click here.

A Dallas-area megachurch has announced it is leaving The United Methodist Church, but without taking a congregational vote or in other ways following the denomination’s approved path for churches that want to disaffiliate.

“Everyone involved has a deep love for the denomination that birthed us; but the fractures and flaws of the institution are too deep to ignore,” said the Rev. Arthur Jones, senior pastor, and Kathy King, the church’s executive committee chair, in a statement.

Many United Methodist churches in Texas and across the U.S. have in recent months disaffiliated or explored doing so under Book of Discipline Paragraph 2553. Though The United Methodist Church has a trust clause — meaning local church properties are held in trust for the denomination — Paragraph 2553 offers a pathway for local churches to depart with their properties. But the provision has detailed requirements, including a two-thirds vote for disaffiliation by church members.

St. Andrew reported that its executive committee made the decision to leave after extensive study and votes by other key church committees. Leadership described the congregation to UM News as “overwhelmingly supportive.”

The church’s move caught many in the North Texas Conference by surprise, including Bishop Michael McKee.

“I was not aware of what St. Andrew was considering; they only contacted me to inform me of their decision,” he said in a written response to questions from UM News.

McKee said the North Texas Conference expects clergy and churches to uphold the Book of Discipline, including following Paragraph 2553 for disaffiliation.

“The process by which St. Andrew made this decision is unique in the history of our Wesleyan tradition, which requires congregational votes on major decisions,” McKee told UM News. “I mourn the fact (that) the members of St. Andrew were denied both voice and vote on the most consequential decision their church has ever made.”

Others in the North Texas Conference also spoke out.

“I find it alarming that they made this decision without a congregational vote,” said the Rev. Don Underwood, pastor emeritus of Christ United Methodist Church, another large congregation in Plano. “The protection for church members that is provided by open meetings, dissenting voices and congregational votes is a cherished Methodist tradition, and it is required by the Discipline.”

Sam Hodges is a staff journalist with UMNews.