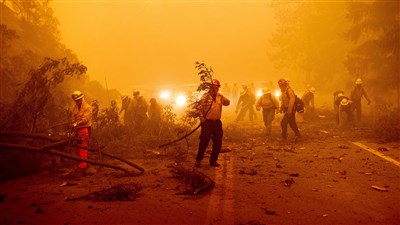 Editor's Note:  Give Now!  Right now, our financial support is crucial.  Our dollars make gift cards, hotel rooms, groceries, and clean water possible for our brothers and sisters affected by the Dixie Fire and their calls for help are coming.


The Dixie Fire reached into Shasta County last Sunday. It is also forcing road closures along US 395 in Lassen County as evacuations are ordered in Westwood, Janesville and parts of Susanville.  Orders to begin allowing people from Chester to return home were rescinded.

There is now a new shelter in Portola. Attempts to transport people from the shelter in Susanville to Portola were halted when the fire forced the closures of portions of US 395. As of about 2pm today, 20 vehicles at a time could be escorted thru the roadblocks in either direction.

Please add the people of Susanville, Janesville, Westwood, Eagle Lake, and Mineral in TEHAMA County to your prayers.  Mineral was evacuated beginning the 17th.

On a good note. In my role as District Commander for the American Legion, I made a couple of phone calls a week ago, and the Department of California rallied around. On Monday, two 20 foot trucks and two pickup trucks FULL of items specifically requested and other supplies arrived and were delivered to the Elks Lodge in Quincy.  The Department Commander  Autry James  drove one of the 20 foot U-Haul trucks and Department Adjutant Barbara Lambrano was in the other 20 footer. Two District Commanders from Los Angeles county drove loaded pickups.  I don't remember all of their names, but Jere Romano was one of the drivers.  Each vehicle had at least one passenger so there were 8 Legionnaires with the four trucks on Monday.

Volunteers from the Elks Lodge  including  90year old Robert Turcotte, also a member of Legion post 568 in what used to be Greenville, helped us unload.  Yes, I helped, too. No, I am not as old as Bob is, but I am not a kid anymore, either.

Veterans Service Officer Bill Cook organized the use of the Elks Lodge to receive, sort and inventory  and distribute the approximately $100,000 in donations from all over California. He is also the custodian of the more than $4000 in "Gift Cards" my Legion buddies brought to augment their other tangible donations.

There is a loaded 26 foot truck that was scheduled for delivery in Susanville today, August 18, that had to be turned back due to road closures. VSO Bill Cook is coordinating where this load is to be delivered on the 19th. Department Sergeant at Arms Henry Sanchez is driving this one. He is also an Elk  and on a tight schedule because he is due in San Jose early Friday the 20th to set up the two-day Department Executive Committee [DEC] meeting scheduled for this weekend.

Prayers please for all of those affected by these fires  and all of the more than 6200 firefighters plus all the National Guard and other police personnel here to help, and for my Legionnaire compadres who have come through in a show of unity for fellow veterans and their families and their communities.

We still need rain desperately.  Today was relatively cool  with no wind and very dry. The air quality is extremely bad.
Dixie has now consumed more than 665,000 acres and crossed over the top of the Sierra Nevada from West to East. Some of the peaks she burned across are more than a mile high.

I will be attending this weekend's DEC via Zoom, which option was just announced today. There is no way I could attend in person and was given a 'pass' by Commander James on Monday.  There would be no one from my District at this very important meeting if I don't take advantage of the Zoom option.

We can still praise GOD that there have been no human fatalities.  Injuries mostly minor...but all of those that were unaccounted for have been found and our alive and safe.

The key difference between Dixie and the Camp Fire of 2018 is WE HAD WARNING!!! YES, Dixie was fast but we were prepared because we had warning.

Praise the Lord in all things.

Marj
Greenville UMC
the buildings may be gone  but the church is and was the people and we're still here, the body of Christ is alive.

Marj Goosey served as the Lay Leader at the Greenville UMC, Greenville CA.