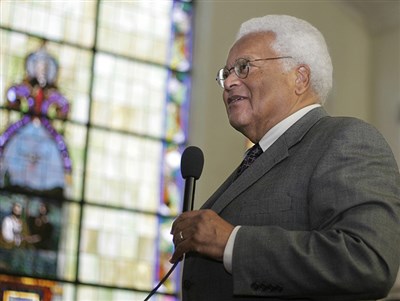 The Rev. James Lawson speaks about nonviolence at First Baptist Church in Montgomery, Ala., the site of a 1961 confrontation between Freedom Riders and an angry mob. The visit to the church was part of a 2009 congressional civil rights pilgrimage to Alabama. Lawson was one of several United Methodist leaders participating in the trip sponsored by the Faith and Politics Institute. File photo by Kathy L. Gilbert, UM News.


One of the most celebrated and influential United Methodists is lending his name to an institute at Vanderbilt University that will promote and study nonviolence.

The Rev. James Lawson, who has been called the “architect of the civil rights movement,” has given his blessing to the James Lawson Institute for the Research and Study of Nonviolent Movements at Vanderbilt University.

Lawson, 93, told United Methodist News that he will act as “spiritual adviser” to the institute, along with his ongoing work advising, teaching and writing.

Lawson released a book in February on how to use nonviolent protest to cause change, “Revolutionary Nonviolence: Organizing for Freedom.” He is starting work on a memoir, which will be published by Random House in 2023 if all goes as planned.

“Dr. Martin Luther King Jr. once referred to the Rev. Lawson as the leading theorist and strategist of nonviolence in the world,” said Daniel Diermeier, chancellor of Vanderbilt, during an April 7 event to introduce and celebrate the new institute. “Without Rev. Lawson's strategic ingenuity, spiritual guidance and moral example, the civil rights movement as we know it would not have existed.”

The institute will “work toward a world with no violence,” said Phillis Isabella Sheppard, a professor of religion, psychology and culture at Vanderbilt who was tapped as the institute’s first director.

“This is either a grandiose fantasy to believe that such a world is possible, or it expresses the most profound dimension to the work of this institute,” she said. “I think it is the latter.”

Patterson is a UM News reporter in Nashville, Tennessee. Contact him at 615-742-5470 or newsdesk@umcom.org. To read more United Methodist news, subscribe to the free Daily or Weekly Digests.