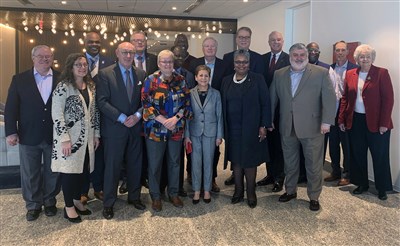 A diverse group of bishops and other United Methodist leaders gather for a group photo in Washington after reaching agreement on a proposal that would maintain The United Methodist Church but allow traditionalist congregations to separate into a new denomination. Some of that team are frustrated after the Judicial Council declined to rule on the proposal ahead of General Conference. Photo courtesy of the Protocol Mediation Team.

The United Methodist Church’s top court has held off on deciding whether a denominational separation plan passes constitutional muster.

And that has some of the plan’s architects frustrated and worried.

“This ruling simply adds to the feeling that the denomination is ‘stuck’ and to the sense that our well-regimented institutions are unable and unwilling to address the very big challenges facing The United Methodist Church,” said veteran church leader Randall Miller.

Among those challenges is the denomination’s decades-long, intensifying debate over the status of LGBTQ people that already has some congregations heading for the exits.

Miller was among a diverse group of 16 United Methodist leaders who, with the help of famed mediator Kenneth Feinberg, developed a proposal aimed at resolving that debate.

Their proposed Protocol of Reconciliation and Grace Through Separation, if adopted, would allow traditionalist churches and conferences (those who support restrictions on gay marriage and ordination) to leave with church property and $25 million. The proposal also sets aside $2 million for other groups of churches that might leave.

The protocol mediation team — convened in 2019 by the late Sierra Leone Bishop John Yambasu — included bishops as well as leaders of traditionalist, centrist and progressive advocacy groups that had often been at odds in the homosexuality debate. With the protocol, they struck an accord, and advocacy groups across the denomination’s theological spectrum have endorsed the plan.

Ahead of the lawmaking assembly, the Council of Bishops also asked the Judicial Council, the denomination’s top court, to review whether the protocol was within the bounds of the church’s constitution.