Faith during a time of uncertainty: Sutra & Bible Exhibit at the Japanese American National Museum 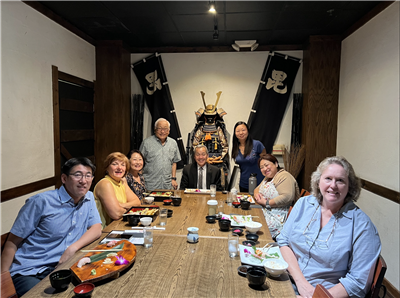 On October 14, 2022. A group of people from the California Nevada Annual Conference made a trip down to Los Angeles, CA to visit the Japanese American National Museum for their Sutra & Bible Exhibit.

The Japanese American National Museum was founded in 1982 in Los Angeles’s Little Tokyo for the purpose of establishing to preserve, interpret and share the story of the many Japanese Americans experiences in the U.S. during war years and of their Issei (First Generation) Pioneers to a national and international audience. This emerged in the midst of the ongoing movement for redress and reparations.

The Sutra & Bible Exhibit had many interesting artifacts and important evidence of U.S. history, not many know about. A part of history where the administration at that time, during the war, thought it was in the best interest of the country to forcibly interned 120,000 Japanese Americans and Japanese Nationals or citizens residing in the U.S. to ten different camps across the U.S. The internment was a legalized system of racial oppression, based off of race or ancestry. Families, including young children were interned together. Each member of the family was allowed two suitcases each of their belongings.

The Japanese Americans of that time drew on their faith to survive indefinite incarceration, unjust deportations, family separation, and many more uncertainties. There were a few printed last sermons on display from ministers who delivered them from different churches before the forced evacuations that was very moving. Reminding the congregations of God’s plan of redemption. No one is left out. This was to instill hope and remind them of their faith that will see them through it all.

There were stories of people faced with sudden, heartbreaking exile from artifacts on display: from prayer books, religious scrolls brought into the camps, crosses, Buddha statues, and handcrafted altars to keep their spirit alive. There were sacred scriptures created in the camps, a couple of heavily annotated bilingual bibles, handwritten by the Salvation Army’s Captain Masuo Kitaji during his incarceration in the Poston camp and an interesting story of ink-inscribed stones that were unearthed from Heart Mountain camp that make up a part of the Lotus Sutra.

This exhibition shares the many ways that the Christian and Buddhist communities came together and provided refuge, instilled hope, and taught compassion as Japanese Americans survived barbed wire, under martial law, and on the battlefield during WWII. This special exhibit has recently been extended to the end of February, and I pray that many if not more can make the time to visit a part of history that isn’t found in your everyday public school history book.

Many thanks to Rev. Motoe Yamada Foor for sparking the interest to get a group together for this tour, and to Rev. Mark Nakagawa, current District Superintendent of the West District in Californian Pacific Conference for arranging the tours with one of the curators, Emily Anderson, who made the experience all the more intriguing in person than what you could ever read about and see pictures of.