GBCS, UWF sign on to global women NGO statement against the war in Ukraine. 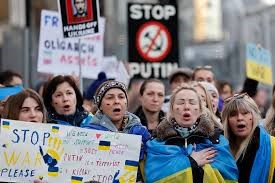 
Editor's note: The General Board of Church and Society, GBCS,  was joined by United Women in Faith and the World Federation of Methodist and Uniting Church Women in a statement against the Russian invasion of Ukraine.The statement speaks to the detrimental effects of war on all peoples, but especially women and children, and those living the horrors of this invasion in Ukraine. The statement, drafted by predominantly women’s organizations worldwide has close to fifty organizations endorsing it, including the World Federation of Ukrainian Women’s Organizations. The statement was shared widely by Congo: The Congress of Non-Governmental Organizations in Consultative Relationship with the United Nations.  Click here to visit the Congo site.

Statement Against the War in Ukraine

During the 20th Century, Europe and the world strove to recover from devastating wars. Now, war has returned to the continent to the detriment of humanity. The human impacts of this war will reach far into the future. This conflict is in clear violation of international law, which forbids acts of aggression, the UN Charter and human rights for all. International humanitarian and human rights law must be upheld; the targeting of civilians constitutes a crime against humanity and a war crime.

Together, we call for an immediate halt to hostilities, for all troops to be withdrawn, and for good-faith, peaceful, diplomatic negotiations to begin in a neutral territory. The actions of states must place the good of citizens and humanity at their heart, accordingly, all civilians must be protected.

War is never gender-neutral. Women and girls in all their diversity are always disproportionately affected by war, and it is no different in this conflict. The projections that millions will be displaced and will become refugees, are being realised with thousands fleeing daily. Many of those on the move are women and girls; specific, targeted, gender-transformative programmes must be immediately developed and implemented to ensure that their lives, hopes and dreams are not irreparably damaged by this war.

Women and girls caught up in this humanitarian crisis will miss out on valuable education. They are at increased risks of early or child marriage, trafficking, sexual exploitation and gender-based violence. Women and girls will now be unable to access vital medical services, including sexual and reproductive health treatment and support. The UN Population Fund has shared how pregnant women, new mothers and babies are having to be cared for in make-shift underground bunkers or are giving birth in metro stations as health facilities become unsafe or are too damaged to function.

Older and disabled women struggle to escape conflict areas as transportation becomes unsafe and usual support is no longer available. Girls and women of all ages are now facing an uncertain future with increasing fear under shelling. Many will be left with long-term trauma. The infrastructure damage caused by war sets back sustainable development, and the achievement of gender equality.

With the presence of working nuclear power plants in a war zone, the environmental risks are significant during a time when the world is already facing a climate crisis. Now, Russian nuclear forces are on high alert. The consequences of any nuclear fallout would be unimaginable and devastating to the Ukrainian people, the environment of neighbouring countries and the world. International institutions and the global political system have been constructed to avoid just such an eventuality. In 2017, the Treaty on the Prohibition of Nuclear Weapons was negotiated and the International Campaign to Abolish Nuclear Weapons was awarded the Nobel Peace Prize, both major steps towards a non-nuclear world. Any nuclear threats must be stepped down.

Members of civil society open their homes to refugees, feeding those on the move, and promoting their safety. This is already happening in Ukraine and neighbouring countries; these humanitarian efforts must be supported. Due to the nature of refugee dispersal and internally displaced persons, collecting thorough and reliable disaggregated data on women and girls in all their diversity will be almost impossible. This will make it difficult to assess the total impacts of this war on women and girls, including those living in rural and remote communities and those from indigenous communities less well-known outside of Ukraine.

Soldiers must be withdrawn from hostilities on Ukrainian soil and political leaders must seek a peaceful resolution. International law and diplomacy should always be the mechanism to peacefully address disagreements between states; the needless destruction of war is only to the detriment of all people. In our interconnected world, we can see first-hand the rapidly increasing impacts of this conflict. We can all learn from the human stories which demonstrate the pointlessness, futility and devastation of war. Protests and acts of resistance and human understanding are being joined worldwide. The signatories of this statement join the call of many across the world for this war to end now.

{To endorse the statement, send email to infonews@ngocongo.org, including the name and headquarter location of the organization, and the name of the responsible person agreeing to the endorsement).

Co-endorsers in the order received