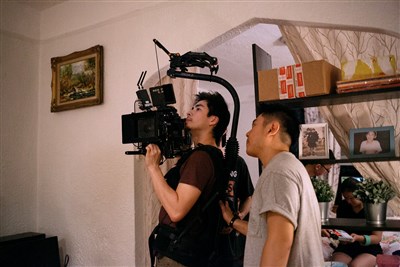 United Methodists Julian Kim and Peter Lee didn’t see their lives represented in Hollywood films, so they did it themselves.

“Happy Cleaners,” an independent film set in the diverse Flushing neighborhood in Queens, New York, is about a Korean American family that owns a struggling dry-cleaning business. It is available to stream on Apple TV, Amazon, iTunes, Google Play and YouTube.

“I think when you see images of Korean Americans depicted on screen, they’re always the kind of side character … and definitely stereotyped,” Kim said. “Sometimes it’s a model minority, a very kind of silent (person) who works hard and achieves big dreams.”

In addition, Asian Americans have faced attacks recently because some mistakenly blame them for the spread of the coronavirus.

These assumptions aren’t the reality, the filmmakers said.

“We’re struggling working-class Americans like many of you out there,” Lee said. “So, let’s just connect on that level. I hope that we’re able to share that a little bit (in ‘Happy Cleaners’).”

The film is a low-key slice of life story about the Choi family, who are struggling to keep their business afloat against challenges including a new condescending landlord, rude and threatening customers and some family dissension. Daughter Hyunny, played by Yeena Sung, works as a nurse at a hospital and helps the family financially. Son Kevin, played by Yun Jeong, is a talented cook who dreams of moving to Los Angeles for a fresh start as part of the food truck scene there.

Patterson is a UM News reporter in Nashville, Tennessee. Contact him at 615-742-5470 or newsdesk@umcom.org. To read more United Methodist news, subscribe to the free Daily or Weekly Digests.
Share