Where Love Lives: Fair and equal ordination for all: A queer clergy’s path to ministry, ordination and hope for full inclusion 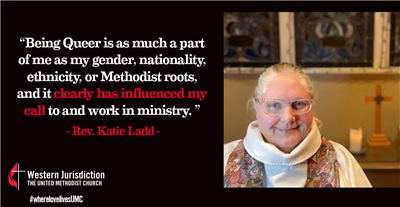 As the Western Jurisdiction of The United Methodist Church continues its “Where Love Lives” campaign this month, the Greater Northwest Area of The UMC will explore our LGBTQ+ siblings’ call to ministry in a denomination where, by and large, they are still not welcome.

This is the unfiltered story of Rev. Katie Ladd, an ordained elder in the Pacific Northwest Conference who identifies herself as queer. Listen to her story of being called to ministry as an outsider, going through her ordination service without her beloved standing beside her, and her hopes for the denomination’s future.

Being Methodist is a core part of my personal identity. My family counts two circuit riders in it – Jeptha Hughes and Ashley Hewitt. While history does not indicate calling, the stories of circuit riding down the Natchez Trace and into Louisiana fueled my imagination as a child. I preached to my stuffed animals on the Sundays we did not go to church. This imagination would become part of my dreaming for a church rooted in the past, oriented to the context in which it is found, and nimble and responsive to a future yet to be charted.

The first real voice that invited me to think about ordained ministry was my associate pastor, a woman, who approached me after youth Sunday and remarked that I might give the idea some thought. I brushed it off with a laugh. After my first year in college (a United Methodist liberal arts college), I began the candidacy process; it languished for years. While working for an environmental chemistry firm in Houston, my spirit cried out for more. My college advisor from the religion department encouraged me to return to graduate school with eyes toward a master’s degree of divinity (MDiv). I wanted to enroll in a master’s degree in art program en route to a doctorate degree. This adviser persuaded me against the latter, seeing in me something I couldn’t see in myself. This has been true throughout my call.

Some are called from deep within; some of us have the call articulated by others and are guided toward a life that we otherwise would not have chosen – think Jonah or Moses. Even in divinity school, I did not see myself working in a church setting. Medical ethics was my focus. Yet, throughout a gradual but transformative time, the work of sowing community and participating in the healing of the world through community led me back to what my ancestors did so long ago – pastoral work in a rapidly changing social landscape.

Being Queer is as much a part of me as my gender, nationality, ethnicity, or Methodist roots, and it clearly has influenced my call to and work in ministry. Throughout my life, I have been an outsider. I have never fit in. Some of that is due to sexual orientation, but not all. This outsider status has opened me to empathy in a way that transcends the particularities of my own experience and in ways that bring me into deep spiritual community with people very unlike me. That said, when I began the long and circuitous route to ordination, sexual orientation was not part of the conscious discernment process – not until divinity school. It was there that the dean of Methodist studies discouraged me from taking Methodist classes. He deemed them a “waste of time” because I refused to live in a closet. I insisted on living out as God created me to be. Therefore, I would either never be ordained or would not remain ordained. He told me to save my money and spend it elsewhere in school.

In the 1990s there was no place for an out bisexual clergy person in any denomination, including ours. While I didn’t take his classes, that discouragement achieved the opposite of his goals; it made me more determined than ever to stake my claim in the church that had been my home – and my family’s home – for generations. I belonged here and no prejudice would drive me out. Most of my early ministry was centered on people living with addiction, as I have done. I worked with abused and neglected children. I worked with unhoused youth and young adults. While I have never experienced this kind of trauma, I did know what it felt like not to belong and to know what it means to have one’s core self-excluded, ignored, derided, and despised.

Rev. Katie Ladd is an ordained elder in the Pacific Northwest Conference.
Share