A garden trellis is all that remains of Greenville UMC.

Author's note: The Dixie and Caldor fires are extinguished and the burn scars remain. Yet, signs of rebirth are emerging from the ashes in Northern California. Bishop Minerva G. Carcaño led a conference delegation that included Director of Connectional Ministries Jorge Domingues, Lay Leader Micheal Pope, Great Northern District Superintendent Blake Busick, Disaster Response and Volunteers in Mission Coordinator Steve Elliott and Director of Communications Selby Ewing on a 3 day tour of Northern California areas affected by the Dixie and Caldor fires. This is the first in a three story series.

The Dixie Fire was an historic fire, so large and powerful that it created its own weather system. As the group made its way from Sacramento to their first stop in Portola, there were few signs of the devastation to come.  The Dixie fire burned 963,000 acres in Northern California – roughly the size of the San Francisco Bay area.

Portola UMC Pastor Becky Stockdale, and her faith family, which includes people of many different faiths, hosted the group for breakfast and shared an introduction to what they would be seeing that day. She helped folks understand the context behind the communities they would tour and an overview of how the Dixie fire spread through the area and the continuing affects being experienced by residents, many of whom have returned to devastated landscapes and burned out homes.

One important learning was that although the fires have gone, the scars remain, and the scars are not only war torn like images of mountains and valleys and burned communities with shells of cars and homes. The scars include trama around personal loss and coping with resulting economic devastation that continue to trap residents much like the Dixie fire itself. 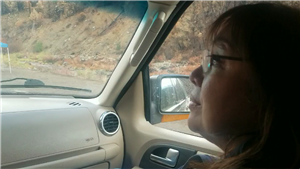 As the group made their way to Taylorsville UMC, burned areas, referred to as 'scars', of the Dixie fire became apparent. Bishop Minerva shared her thoughts along the way. Click here to watch the video. 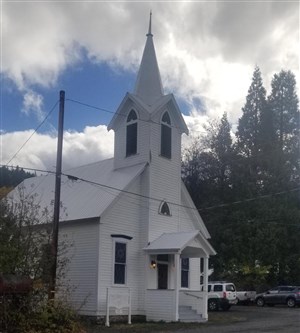 Taylorsville is well known as the miracle town of the Dixie fire. Surrounded on all sides by the Dixie fire, a mere change of the wind spared the town. Taylorsville UMC Pastor Karen Watson shared that the church serves an ecumenical, multi faith community which supported evacuees from nearby towns, including Greenville, which was a total loss.  Folks who worship with Taylorsville said that they feel welcome, they feel loved, and they feel they are in a place that does good work that they can be a part of.

Great Northern District Superintendent Black Busick served Taylorsville, UMC as his first appointment. Greenville UMC was his second appointment and next stop on the delegation’s schedule for the day.

The Dixie fire burned through the town of Greenville in 20 minutes and burned Greenville UMC to the ground in 8 minutes. The delegation gathered at the charred foundation of Greenville UMC as DS Blake outlined the foundations of the church buildings. Everyone was given a nail from the church, which was built in 1949. A special service of remembrance took place on new green grass, springing up in what was the lawn of the church. Becky Stockdale played the flute during the service while the group considered Psalm 121 and looked toward the hills for hope. Click here to see the video. 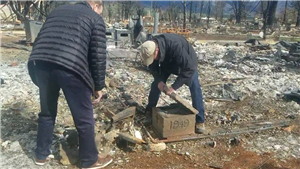 After the service, the group moved to the cornerstone of the burned out Greenville church and opened a time capsule lodged there in 1949 when the church was dedicated. Click here to watch the video. Inside the capsule they discovered a letter announcing the beginning of a new Methodist initiative in the US called The Advance. Despite the devastation, the Greenville UMC faith family has remained tight knit and are making plans to build their church anew. The find within the cornerstone helped seal their determination and infused them with enthusiasm. Click here to watch the video. 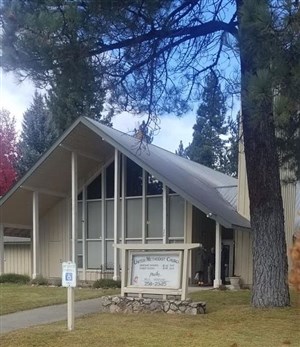 From Greenville, the group joined Pastor Mele Vakapuma and her faith family at Chester UMC.  The church supported many evacuees in the region and continue to serve and support those who are rebuilding. 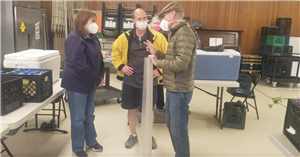 The group departed Chester and headed to Susanville UMC where they were met by Pastor Charles White and volunteers distributing food to people from across the Susanville region. Click here to see the video.

Pastor Charles said that operating support services like the food pantry during a pandemic and then a wildfire was not something that he was taught in seminary.  Cars were packed with so many personal belongings that there was often not enough room for all the food that could be given. Pastor Charles also supported the Susanville Local Assistance Center that served evacuees from Greenville, Chester and Westwood. 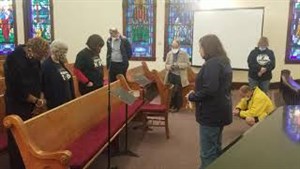 There was an opportunity to talk with residents and volunteers at the food bank who described the double wave of pandemic and fire as tragedy and chaos for those in the region who were already having a hard time making ends meet. Bishop Minerva closed the Dixie tour day and shared a moving prayer with evacuees and volunteers in the church sanctuary. Click here to see the video.

Please pray for those working in the communities of the Dixie and Caldor fire regions. If you would like to get involved, click here to learn more about becoming a Volunteer in Mission (VIM), Disaster Response Ministry and being trained as an Emergency Response Trainee (ERT), and to give to the California-Nevada Disaster Response Fund and UMCOR.

Selby Ewing is Director of Communications at the California-Nevada Conference of The United Methodist Church.