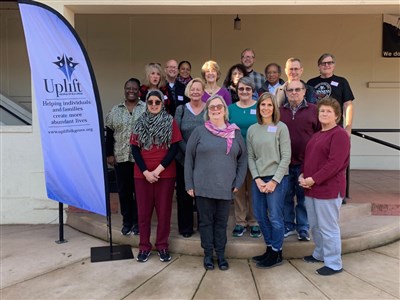 “My daughter probably wouldn’t be alive right now,” shared Crystal reflecting on the impact of her participation in the Uplift People of Elk Grove, a non-profit primarily started by Elk Grove United Methodist Church.  During the weekly Tuesday night Zoom meeting, she explained her successes and her daughter’s. “She is thriving and has two jobs and going to school and saving more money than I have in my savings.”

For Crystal and others, this non-profit is living up to its’ motto: “Rising People From Poverty.” The organization is a member of NETworX, a national movement to “measurably reduce poverty at its holistic core, not through well-doing for others, but through well-being together—individuals and communities seeking to build intentional relationships through education and love of neighbor as well as love of self.”

Crystal was there at the inception of the program in Elk Grove more than four years ago. The curriculum and other resources provided through NETworX help leaders and volunteers, called Allies, train participants, or “Champions,” how to navigate the financial world and build supportive relationships.

I joined a weekly meeting recently and met Crystal along with other individuals, both Allies and Champions.

Before the pandemic, the meetings were in person, but tonight, we shared a zoom screen. Twenty-two different faces flickered in.

“I’m sorry to put the timer on…” states Program Director Jeffrey Teague who wasn’t really apologizing as much as letting everyone know the meeting had begun and would end on time. Teague shared a few announcements including tips on how to access a new app.

“I know there’s a learning curve…” explains Teague respectfully making sure that everyone had explicit instructions on how to find the app, create an account and post information. Allies and Champions listened intently.

“So, how was your week, J.B.?” asks Teague, a question he asks each participant each week including me. The atmosphere is informal and caring. One by one, we each share what happened that was great and not so great. Frustrations are heard and noted, successes applauded with smiles and claps. One person feeling depressed said she felt better.

The group splits off into two zoom rooms. One room, reserved for “Cohort 4” is to spend the remainder of the time reading and discussing specific curriculum. The other room-- my group—is made up of Cohorts 1-3. We raise our virtual hands to show who completed the Myers-Briggs Inventory Test. One man says he is currently taking the test as Teague reviews information from the NETworX module entitled, “Organic Leadership.” Teague shares his screen and shows a video.

One by one, we share personality types. Teague asks open ended questions about how personality affects other aspect of our lives. Allies and Champions give examples. One Champion is driving her car and I can see her steering as she reflects on the personality type her test revealed. Her voice cracks with static but her accented words are clear and strong.

On time, the meeting closes and Crystal stays on to fill me in what it’s like to be part of the program.

“With the supports that they give and pushing you even sometimes when you don’t want it, um, really helps,” states Crystal. Her screen wiggles up and down as she walks around a corner, her background shifting here and there as she puts away supplies on various shelves. She owns a small business.

“You were there from the get-go, too, Crystal,” reminds Kathleen Goldsberry, an ally I see sitting in her office smiling. Crystal was one of the first Champions to graduate from the program. Now, she is often a guest speaker to advocate for the non-profit.

“Yeah, I was the one sitting in the corner quiet,” Says Crystal.

“And she is not quiet anymore,” adds Goldsberry, “She speaks now--which is wonderful!”

“If we could get everyone into this program, there’s things we would no longer need, you know,” states Rev. Kathy LaPoint-Collup. “It solves a lot of social issues along the way.”

LaPoint-Collup was pastor of Elk Grove UMC in 2016 when the idea came to fruition all due to a building frustration of the overwhelming community need she encountered there.

“Because we had a pretty big outreach to the unsheltered community, we did free meals on the weekend and a lot of things during the week,” stated LaPoint-Collup, “It was a real need to help people break out of the cycle of poverty. So, when I heard about NetWorXs, I went to a couple of orientations and I thought, ‘This is what we need to do!’ And so, I dragged a whole bunch of people out of Elk Grove—not just Methodist but …a bunch of people-- to Carson City and they were all like, ‘yeah, you’re right, this is the missing step in our program. So, we got a commitment from all of them to start it.”

The group received training with Capital City CIRCLES Initiative at Carson City UMC in Nevada, the Western Regional Training Center for the CIRCLES USA model. The model boasts that participants increase their income after six months by 39% and show a 78% increase after 18 months. In 2015 with a national collaboration of churches, Carson City helped birth NETworX, the new organization that was endorsed by the UMC General Conference.

“So, we decided to start a new non-profit and it’s more daunting than it looks,” stated Mark Hedlund, current Uplift People of Elk Grove board president and member of Elk Grove UMC. It took a dedicated group of volunteers from both within the church and without to finish the paperwork and preparations to get the program set up. “We actually had another local nonprofit as our fiscal sponsor before we received official 501 c3 status,” added “We were finally able to get it organized legally and all that.”

“It seemed overwhelming at first. When you first look at it you think, ‘Oh, my God! THIS is a lot of work—how can I do this?” explains LaPoint-Collup. “The important thing to understand is that it’s not one of those things where you serve a meal or blankets are passed out—it’s a much longer in-depth process in that we are changing people’s lives permanently—you’re breaking the cycle of poverty and it takes three or four or five years per family to do that. So, it’s not fast moving.”

“Basically, we created a new supportive community for folks that generally have not had them in their lives,” added Hedlund, “and that of course makes the big difference for folks going through this process.”

Hedlund notes that forming the new organization also created “a more ecumenical relationship where churches are working with each other for the same goal and also creates a broader base of volunteers.”

“We did not want it to simply be an organization that is a subset of the church,” explains Hedlund who listed schools, community run organizations and other non-profits that now partner with Uplift People of Elk Grove. “We actually had another local non-profit as our fiscal sponsor before we received official 501 c3 status and about half our board (who did all the groundwork) are not affiliated with EGUMC. But certainly, without the support of the church Uplift wouldn’t have gotten off the ground but it was a broader effort.

“While its faith based it is not faith run,” added Hedlund, “We wanted it to reach out to other folks in the community to support it … to have other partners.”

For information on NETworX orientation and training, contact Rev. Robert Jennings-Teats at jenningsteats@sbcglobal.net or 775-220-1787.