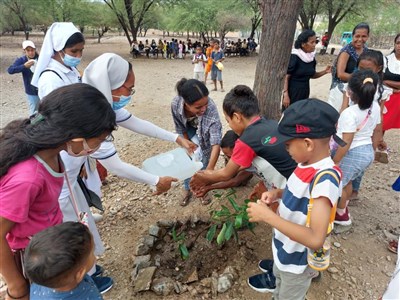 In May, Nobel Peace Prize winner Jose Ramos-Horta was again elected president of East Timor (now renamed Timor-Leste in honor of its Portuguese cultural heritage).  He took the oath of office at midnight on May 20, when the nation celebrated its 20th anniversary of independence from Indonesia’s brutal military occupation.  Ramos-Horta previously served as prime minister from 2006-2007 and president from 2007-2012.

President Ramos-Horta campaigned on a platform for ending poverty, poor health of mothers and children, and unemployment.  He urged dialogue to heal the country’s fractured politics.  Professor Clinton Fernandez presents grim statistics to call attention to the importance of these priorities:

“One-third of Timor-Leste’s people live in poverty and 46% live in multi-dimensional poverty (that goes beyond raw income data and includes deprivations in health, education, and standard of living).

East Timor’s level of hunger is classified as “Serious” by the Global Hunger Index, which tracks undernourishment and child mortality, child stunting and child wasting in developing countries.  According to the World Food Program, 47 percent of children under five years of age are stunted (too short for their age), 8.6 percent suffer from acute malnutrition, and 23 percent of women of reproductive age (15-49) are anemic.”

Nearly half of Timor-Leste’s 1.3 million people live in troubling privation, the highest percentage in Southeast Asia.

Ramos-Horta, the new president, immediately launched a “Call for Action for Nutrition” and on July 14 conferred the Order of Timor-Leste on Dagen Liu, the Country Director of the World Food Program, in recognition of his work in addressing Zero Hunger.  Clinton Fernandez, however, points out that at this stage these actions are very small steps, with an enormous amount of work still remaining to be done.

East Timor needs to import 60% of its food.  A “small developing state,” it is particularly vulnerable to the effects of climate change.  Its terrain also makes it susceptible to a range of natural hazards such as landslides, flash floods, tropical cyclones, earthquakes and forest fires.  Just over two-thirds of its population are subsistence farmers who depend on rain-fed agriculture as their main source of income; so farming remains the most important sector of the economy.

Cyclone Seroja, which struck on Easter Sunday last year and caused the worst flooding in decades, killed 44 people and affected 34,000 households.  Economic losses, including destroyed infrastructure, were estimated at $300 million.  However, the full economic impacts on livelihoods, GDP, and agricultural production are not yet known.  What is clear is that this event has pushed even more families into being without reliable access to adequate food.  The floods compounded the effect of the COVID-19 pandemic as well.  By requiring restrictions on domestic and international movement, Covid disrupted agricultural markets, business activity, and employment prospects (especially for women).  The good news is the public health response was robust, with 76.4 percent of the population age 18 years and above being fully vaccinated.  In comparison to the year before this is a great outcome, because by June 2021 only 3.4% of the over-18 population had gotten their second dose of the Astra Zeneca vaccine.

In the aftermath of the twin crises of severe flooding and Covid, it is estimated only 15 to 37 percent of households can afford a nutritious diet.

Fernandez sees the greatest needs are in strengthening agriculture, community-based tourism, small industries making products for domestic use, and the infrastructure that supports all this – rural roads and water supply, local schools and clinics, and decentralized renewable electricity.”
(I am indebted to email communications from Dr. Clinton Fernandes, Professor of International and Political Studies at the University of New South Wales in Canberra, Australia, for the aforementioned data.)

Amid widespread poverty, unemployment, and political gridlock in the government, would-be students are largely dependent on outside sources to obtain an education.  ETRO scholarships are intended for those most in need.  As Sister Carolina Maria Correia, Directress of the school in Venilale reports, “the criteria for scholarship selection are those who are orphans, have only one parent, are very poor, and often have many siblings so could not afford to go to school.”  This speaks volumes for why your support is so essential to ensuring some of the “poorest of the poor” receive an education.

Tax-deductible donations can be made payable to “Hayward First United Methodist Church,” earmarked for “East Timor” on the memo line.  Funds collected are equally divided between our two ecumenical partners: the Protestant Church in East Timor (Igreja Protestante iha Timor Lorosae) headquartered in Dili and St. Mary Mazzarello Community school (formerly known as the Salesian Sisters Vocational School for Girls) located in the rural mountain village of Venilale.  Your entire donation goes for Timorese youth and young adult scholarships.  There is no administrative overhead.

Additional information
On August 27, Pope Francis appointed Archbishop Virgilio do Carmo da Silva (56) of Dili the first-ever cardinal from East Timor.  The new cardinal is a Salesian priest originally from Venilale, where our Salesian partner school is located.

I also want to lift up the name of San Francisco’s Anne Treseder (76), who died during the pandemic.  A largely unsung hero in East Timor’s struggle for freedom and independence, Anne worked tirelessly in close collaboration with ETRO and the Portuguese American media to call attention to the suffering of the Timorese people.  All praise and honor to you, Anne!  May your self-effacing efforts on behalf of a sorely oppressed people inspire us.