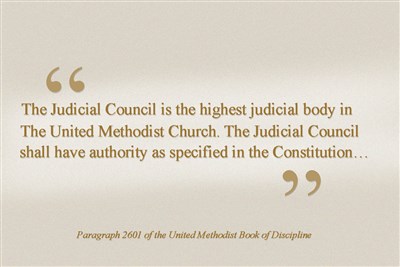 When does a resolution related to LGBTQ people count as aspirational and when does it condone violations of church law?

The United Methodist Church’s top court released two decisions related to such resolutions along with two other rulings April 19.

Because of the pandemic, the Judicial Council continues to meet periodically online to consider items on its docket and release decisions as they are completed.

The Judicial Council also has agreed to take up two requests for declaratory decisions from the Council of Bishops.

The bishops’ first request is a series of questions about whether annual conferences (church regional bodies) within the United States can leave the denomination under current church law. The deadline for the submission of briefs on Judicial Council Docket 1021-23 was April 12, with reply briefs due April 22.

The bishops also asked the Judicial Council a series of questions about whether they can schedule regular U.S. jurisdictional conferences to elect new bishops. Briefs for this item, Docket 1021-24, are due April 19 and reply briefs are due April 29.

The Book of Discipline, the denomination’s policy book, specifies in Paragraph 2608 that parties to a matter before the Judicial Council shall have the opportunity to file briefs. The paragraph also requires that the deadline for submission shall be no less than 30 days from when the Judicial Council posts the docket item.

In the meantime, the Judicial Council released rulings on items that have been on its docket since last fall. Two stemmed from questions of law raised during annual conference sessions.

Bishops frequently face such questions during church meetings where they preside, and the Discipline requires the Judicial Council to review all the bishops’ resulting decisions.

A recurrent source of questions for bishops and thus the Judicial Council is the language of conference-approved resolutions related to the denomination’s longtime debate around LGBTQ inclusion. Often at issue is whether the language in these resolutions negates, ignores or contradicts the Discipline.

The church law book bans clergy from officiating at same-sex weddings and prohibits the ordination of “self-avowed practicing” gay clergy. However, some conferences have challenged these bans.

In Decision 1435, the church court affirmed Bishop Laurie Haller’s decision that the Dakotas Conference resolution, “A Vision for a More Just Church,” is partly aspirational and partly in violation of the Discipline. The conference approved the resolution by a vote of 179 to 172.

Haller said the early parts of the resolution “frame the aspirational intent” and are rooted in values expressed in the Discipline, including that “all persons are individuals of sacred worth, created in the image of God.”

Also in line with church law, she said, is the resolution’s statement urging local churches to welcome and include LGBTQ members.

However, she struck down as “null and void” other parts of the resolution that she said used language encouraging church-law violations.

The voided portions included paragraphs urging the conference’s board of ordained ministry not to consider a candidate’s sexual orientation, allowing individual pastors to discern if they will officiate at same-sex weddings and directing the bishop to refrain from conducting clergy trials related to the LGBTQ restrictions.

The Judicial Council agreed with the bishop. “The resolution ‘A Vision for a More Just Church’ is partly aspirational and partly in violation of the Discipline as noted herein by the presiding Bishop,” the church court ruled.

Last year, the Michigan Annual Conference also passed a resolution saying no lay or clergy member shall be denied access to an equal place in church life “because of race, color, gender, sexual orientation, gender  identity, relationship, ability, national origin, status, or economic condition.” That resolution passed by a vote of 704 to 333.