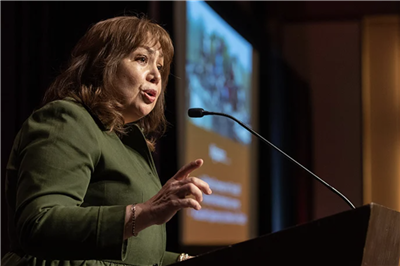 The United Methodist Church’s top court declined to rule on a judicial complaint against a bishop while the church judicial process is ongoing.

Leaders in the Western Jurisdiction announced March 9 that they had placed California-Nevada Conference Bishop Minerva Carcaño on leave from her episcopal duties as two complaints against her were under review. She has been suspended with pay and benefits since then.

The memorandum said that neither the Book of Discipline, the denomination’s law book, nor any of the church court’s earlier decisions “authorizes the Judicial Council to entertain an interlocutory appeal of a bishop.” An interlocutory appeal is a legal term for an appeal that takes place while other aspects of a case are still proceeding.

“Fair process is a bedrock principle of the Church that must be present at every stage of a complaint proceeding,” the joint dissent said. “In this case, fair process has been violated. The Bishop’s rights have been violated. Therefore, we disagree with the majority opinion and believe that the Bishop is entitled to immediate reinstatement to her episcopal assignment.”

In a footnote, the majority’s decision also noted that the Western Jurisdiction had not yet met the fair-process requirement of setting up an Administrative Review Committee. The Book of Discipline in Paragraph 539 says each jurisdiction “shall establish” such a committee to ensure disciplinary procedures are followed whenever a bishop faces an involuntary action such as a leave of absence.

The Rev. Timothy Bruster, first clergy alternate, participated in this decision. The Rev. Luan-Vu Tran, who previously served under Carcaño when she was bishop of the California-Pacific Conference, recused himself and did not participate in any of the proceedings related to this decision.

In addition to joining their colleagues in the joint dissent, Capen and Gulele filed a separate joint dissent. Carcaño’s continued suspension violates the Book of Discipline, the dissent said.