Bishop Minerva G. Carcaño: I wonder what made them conspirators 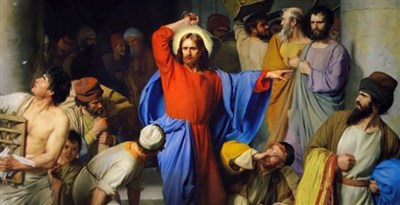 Bishop Minerva G. Carcaño shares a message for Tuesday of Holy Week grounded in Mark 11:15-18 in which she invites us to wonder with her - what moved people then, and may move people now, to conspire against God's holy work of love, justice and service.

You may also read the text of Bishop Minerva's message here:


Jesus Cleanses the Temple
15 Then they came to Jerusalem. And he entered the temple and began to drive out those who were selling and those who were buying in the temple, and he overturned the tables of the money changers and the seats of those who sold doves; 16 and he would not allow anyone to carry anything through the temple. 17 He was teaching and saying, “Is it not written, ‘My house shall be called a house of prayer for all the nations’?  But you have made it a den of robbers.” 18 And when the chief priests and the scribes heard it, they kept looking for a way to kill him; for they were afraid of him, because the whole crowd was spellbound by his teaching.

I wonder what made them conspirators.

On what is for us today Holy Week, Jesus entered Jerusalem as part of the faithful who were gathering for the Passover, a time to remember the liberating love and the power of God who freed the Israelites who had been slaves in Egypt for more than 400 years.  It was a week of remembering that God stands on the side of those who are enslaved and all who are oppressed.
History records that thousands had gathered in Jerusalem for that Passover.  Jewish men were obligated to make the pilgrimage to Jerusalem for what was also called the Feast of the Unleavened Bread.  It was a time away from the everyday work of their lives to remember God’s blessings and faithfulness.

But for Jesus, who is the same in every season, it was just another day to preach and teach the good news of God’s kingdom.  It was what he did when he went with his parents Mary and Joseph to the temple in Jerusalem when he was 12 years old.  This visit to Jerusalem was no different.  Jesus spent the week at the Temple, preaching and teaching and he began by cleaning it up.
Every time I began an appointment to a local church, I found that some cleaning up was in order.  Sometimes it was the grunge work of cleaning up the pastor’s office. Sometimes the entire church building needed cleaning and ordering.  Sometimes the outgoing pastor would say to me as he handed me the baton, “You’ll have to be the one to clean up this mess,” filling me in on a particular mess in the life of the church.

But this kind of temple cleaning doesn’t begin to compare with the cleaning up that Jesus does.  The mess at the temple was so bad that Jesus is filled with anger, maybe even rage.  He drove out those who were selling and buying in the temple.  He overturned the table of the money changers and the seats of those who sold doves.  He stopped those who used the temple not as a place to worship God but as merely a thorough fare to get to another part of the city.  Jesus winds up calling some of them robbers and all of them those who had ruined the temple’s primary purpose – a place intended to be a house of prayer for all people.

Those who are forced out of the temple and accused of thievery, of the undermining of the true work of the temple, and of being disrespectful of God’s house, were doing what on the surface seemed like alright things, even necessary, or no big deal. Temple offering had to be given in local money and people had come to the temple that week from all over the Roman Empire and from places with a different monetary system.  They needed to have their money exchanged.  Animals and birds in perfect shape were needed to fulfill the sacrifice required of the faithful. So much easier to buy them at the temple than to travel with them.  And so what if someone had found that the temple provided a nice short cut to the other side of the city.

Well, it wasn’t alright to have the focus cease to be the worship of God.  It wasn’t alright if prayers had been drowned out by the noise of the marketplace that had become larger than the sacred space of the temple. Even worse if as is suspected, people who came to offer their best to God were being extorted, charged rates that were unjust.  This was especially abusive of the poor who also wanted to offer to God their offering.  It was not right!

Those who were swept out of the temple didn’t see it coming.  They thought they were just fine, keeping the temple going in their own way.  Did they not know that they had become conspirators against the very work of God? We may stand in judgement of them, aghast at what they did.  But might we fall into similar ways of being, unaware that some of our actions also make us conspirators against God’s holy work.  I am concerned.

I am concerned when our churches rent out more of their space than the space that is left for prayer, worship, and disciple-making.  Some say that it is to keep the church going, but does it truly keep the church going or just extend its dying days?  I am saddened when I participate in worship at some of our churches and never hear the name of Jesus, but hear a great deal about the church’s many projects to the point where it begins to sound to my ears like the peddling of self-promotion. The saddest day was when I was in worship at one of our city churches and a tourist bus pulled up and 20 or so tourists popped out and into worship just long enough to hear the music and scope out the scene and then left, on to the next tourist site.  It was good for business someone told me. Unintended conspiracies can be just as damaging as out right conspiracy.

When the chief priests and scribes heard that Jesus had cleaned out the temple as he had, they conspired to kill him.  They could see that Jesus taught and acted in ways that led the people to him.  Jesus’ very being frightened them because it threatened their power and their authority.  Why would this be?

Jesus taught from the same holy word they taught.  He called people to the same God they worshipped.  Why would they be afraid of Jesus and conspire to kill him?  I believe that it is because he challenged what they had created.

God’s temple is to be a house of prayer for all people.  A safe place for all God’s children. Sacred space where the hurting can be healed, and the hopeless find hope.  A place that is not a short-cut in life but a signpost of the community of love and justice that Jesus came announcing.

This was not the temple the religious leaders had created and held on to, so they conspired to kill Jesus.  Conspirators against the holy.
Friends, might we unaware or in full knowledge be on this day conspirators among those who seek to destroy the good news of Jesus?  I wonder…….I am prayerfully examining my own life and praying for all of us.

May God be with us and all the world on this day as we wonder……..


Bishop Minerva G. Carcaño is Resident Bishop of the California-Nevada Conference of The United Methodist Church.