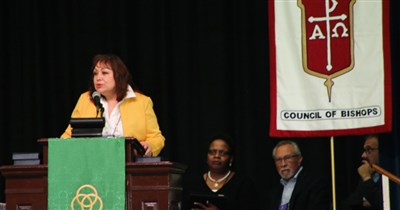 The Council of Bishops of The United Methodist Church this week approved a statement from its Immigration Task Force regarding migrant caravans.

The statement was presented by Bishop Minerva G. Carcaño, who chairs the task force, during the plenary session of the Council’s November 2018 meeting at Epworth by the Sea on St. Simon’s Island, Georgia.

It calls on governments to treat these migrants in ways that recognize and respect their God-given humanity, and with compassion and dignity.

The complete text of the statement is as follows:


Joint Statement in Response to the Central American Migrant Caravans

Human migration is as old as human history. Individuals, families, tribes, and nations have been on the move since the days of Abraham and Sarah and before. Throughout the centuries, political and economic factors, including wars; health and environmental challenges; and racism, xenophobia, and religious discrimination have at times uprooted people and at others lured them to new venues across deserts, rivers, continents, oceans, and national and ethnic boundaries.

Today, migration is a critical international and at times a pressing national issue; a matter of last resort and no other choice for millions of human beings, and a desperate alternative to many who would rather stay where they are if conditions could permit safety and essentials for survival. In general terms, migrants today are those who by force or choice leave their regions of origin because of armed conflict, natural disaster, institutional or gang violence, development projects, human trafficking (including labor, sexual or drug trafficking) or extreme economic deprivation.  (Resolution of The United Methodist Church: Global Migration and the Quest for Justice)

These wise words describe what we see happening through the human caravan that began on October 12, 2018 with 160 brave souls who gathered and together began to journey as the migrants of old.  From Honduras to Guatemala and now to Mexico they have supported each other in their common suffering.  This caravan has grown to 7,000 and the latest reports is that these 7,000 have now formed 3 distinct caravans traveling across Mexico.  More than half of them are girls and women.  They did not want to leave their homes, but because of deadly poverty and violence, found themselves being forced to journey from death toward what they perceived to be their last hope for life.  Some have sought asylum in Mexico while others continue to travel to the U.S. to request asylum in this country.

These migrant sisters and brothers have been villainized, yet as we have sought to minister to them along their perilous journey, what we have seen on the whole is human beings of great courage and deep faith who have placed their lives in God’s hands as they seek the basic necessities for life – food and shelter for their children and above all, safety from those who seek to do them harm.  Their faith in God has strengthened our faith, and their human suffering has convicted our souls that we must accompany them and seek to advocate for their safety and their rights.

We stand together in demanding that the governments of our countries treat these migrants in ways that recognize and respect their God-given humanity, and with compassion and dignity.

Furthermore, we call upon President Donald Trump to cease characterizing our migrant brothers and sisters in derogatory and fear-inducing ways, castigating them as criminals when in fact they have the right under International Law to seek asylum.  As the leader of the most powerful and wealthiest nation in the world, we call him forth to lead with truth, justice and moral compassion.

Above all, we call upon our congregations to be agents of God’s mercy toward the migrant.  We are inspired by Methodist congregations and other communities of faith and compassion who throughout the journey of these migrants have taken some into their homes, fed them in their congregations, and blessed them on their way.  As the Bishops of the Methodist Church of Mexico have stated:  As Christians we are called to receive those who migrate as if receiving Jesus Christ himself. Treat them as if they were our own families, help them as if we were the ones migrating, and extend love to the migrants for we know ourselves to also be a migrant people on the journey of faith (adapted from the Oct. 20, 2018 Immigration Letter of the College of Bishops of the Methodist Church of Mexico, A.R.).