Asians and Asian-Americans of the United Methodist Church Condemn the Rise of Anti-Asian Violence in the U.S. 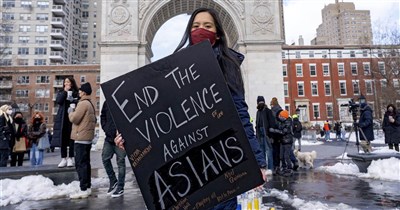 Asians and Asian-Americans of the United Methodist Church Condemn the Rise of Anti-Asian Violence in the U.S.
John 1:5, “The light shines in the darkness, and the darkness has not overcome it.”
Amos 5:24, “But let justice roll on like a river, righteousness like a never-failing stream!”

Lent is a season of self-examination, confession and a walk with Jesus through the wilderness, alienation, betrayal, death and ultimately resurrection. As we journey with Jesus through Lent, we see that we are currently in a period of darkness because there has been a precipitous rise in the hatred and violence against the Asian American community in this country.

These acts of hate are neither sporadic nor haphazard. They reflect a larger systemic trend of anti-Asian American animosity brought on during the COVID-19 pandemic, which has been exacerbated by documented xenophobic policies and racist rhetoric disseminated by the previous Administration. Politically charged racist rhetoric has fomented the hate against Asian Americans. The people who have perpetrated these acts of violence have used racist language including phrases like: Wuhan Virus, Kung Flu, China Virus, China Plague. This dangerous scapegoating is fabricated and must stop.

We strongly condemn the rising physical violence against Asian Americans across this country. In California, attacks against Asian Americans rose by 115%. In the San Francisco Bay Area, racist and hate motivated violence has left one person dead and others badly injured. On January 5th, a 52-year-old Asian American woman was shot in the head with a flare gun in Oakland’s Chinatown. On February 3rd, a 64-year-old grandmother in San Jose, California was assaulted and robbed of cash that she had just withdrawn for Lunar New Year gifts. On that same day in Manhattan, Noel Quintana, 61, was riding the subway when his assaulter slashed his face. On February 4 th a 91 year old man in Oakland, California was inexplicably shoved to the ground by a man who was walking behind him. On February 26th a 36 year old an Asian-American man was stabbed while walking outside the federal courthouse in Chinatown, New York City. On March 14th a Burmese man and his two children were slashed by a knife-wielding attacker while shopping in Midland, Texas. The accused man said he did it because he thought they were “Chinese and infecting people with the coronavirus”. On January 26th, 84-year-old Vicha Ratanapakdee was going for a morning walk in his San Francisco neighborhood, when a man running at him full speed smashed into his frail body, throwing him to the pavement. Mr. Ratanapakdee died of his injuries two days later. There have been more than two dozen recent assaults and robberies on the Asian American elderly in the San Francisco Bay Area and many many more have gone unreported. These attacks must stop.

We commend President Biden who, on January 26, 2021, signed a memorandum pledging to combat anti-Asian and Pacific Islander discrimination and the Presidential memorandum states, “During the coronavirus disease 2019 (COVID-19) pandemic, inflammatory and xenophobic rhetoric has put Asian American and Pacific Islander (AAPI) persons, families, communities, and businesses at risk.” While we wholeheartedly affirm this memorandum as a step forward it must now be followed up by immediate action both by the State and the Church.

Actions
We ask that the church live up to its commitments stated in the 2016 United Methodist Book of Resolution #3422 “ Speaking Out for Compassion: Transforming the Context of Hate in the United States ”. This is an urgent matter of justice.

We ask that all United Methodists read again and live out our own Charter for Racial Justice which states that all persons are of equal value in the sight of God and that racism is a rejection of the teachings of Jesus Chris t. The Charter also states that our struggle for justice must be based on new attitudes, new understandings, and new relationships and must be reflected in the laws, policies, structures, and practices of both church and state.

Finally, we call on the Council of Bishops to create opportunities to listen to and hear from Asian Americans and other excluded groups about the current reality and impact of the violence and hatred; and partner with these groups to act for justice so that the light of Jesus can shine in the darkness, and the darkness of systematic racism will be conquered.

As we continue our journey through this Lenten Season and move from darkness to light, we are reminded that these acts of violence against Asian Americans have their origins in the darkness. Shifting this hatred into the light of God will require that all us condemn acts of racist hatred and move toward love, tolerance and justice; all of which Jesus Crhist modeled in his life, death and resurrection.