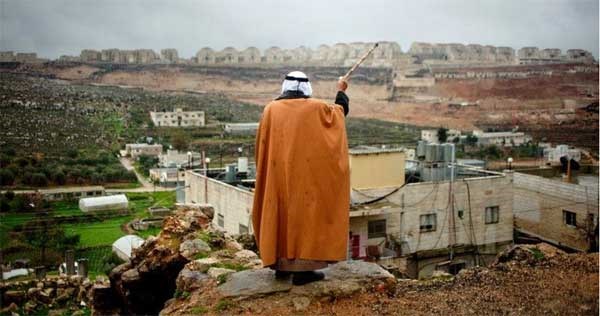 On Tuesday, January 28,  President Donald Trump held a joint press conference with Israeli Prime Minister, Benjamin Netanyahu to publicly introduce his long awaited “peace plan” for Israel-Palestine.  At the Washington D.C. event,   while platitudes of peace offering were made, a significant part of the plan will support Israeli annexation of illegal Jewish settlements  in Palestinian territories as well as annexation of several Palestinian villages.  Wadi Foquin,  located in the Bethlehem district of the West Bank, is among those villages.   The annexation would increase the Israeli land map by over 30%.

Wadi Foquin is known to our annual conference through the ministry of the Friends of Wadi Foquin, a partnership with the village initiated in 2009.   Over the past ten years we have witnessed land confiscation from indigenous families, demolition of fruit trees belonging to village farmers, and  increased expansion of the illegal settlement of Betar Illit encroaching upon Wadi Foquin.  The villagers have already experienced a gradual annexation process and have often heard rumors of  “official” annexation plans.  The Trump announcement accelerates the move toward an official Israeli policy for land annexation in defiance of international law.   With U.S. support as political leverage, Israeli politicians are now strategizing on how to put the final nails in the coffin for the annexation plan as they navigate upcoming Israeli and U.S. elections.

Obviously missing from the announcement event was the presence of any Palestinians to share their perspective on what truly makes for peace.  While the press conference used the language of “peace,” followers of the Israeli-Palestine conflict know that the goal for the plan is land acquisition and continued Israeli military control over the Palestinian people.  In a Kairos Palestine statement issued in response to the proposed peace plan, Palestinian Christians underscored the insulting nature of the announcement:

“The position announced by the U.S. administration regarding what they termed as the ‘deal of the century’ was in fact an insult to history, humanity, the Palestinian people, and the American dignity itself. The American-Israeli proposal is premised on consolidating Israeli control over all of Palestine’s land, making sure that the Palestinian people are subjected to this control, in return for economic promises that are closer to a deal for buying the people and their spirit with money.”

For Palestinian Christians and Muslims it is also troubling that the so-called peace plan is being driven in large part by Christian Zionist groups in America who ascribe to an end times theology in which full annexation of the land by Israel will fulfill God’s promise of the rapture and second coming of Jesus.  According Mairav Zonszein, an Israeli-American journalist, the largest pro-Israel lobby in the United States today is Christians United for Israel (CUFI), now boasting 8 million members. Since 2006, CUFI has been advocating for continued military aid to Israel, settlement expansion, and Israeli war with Iran. The added irony of this Christian Zionist theology is that for Jews who return to populate the Holy Land, salvation will be granted only to the ones who convert to follow Jesus.

For those who believe this theology is a misrepresentation of the Christian faith, Jesus calls us to embrace a different theology and a different course of action.   The Kairos Palestine statement calls for Christians to be people of genuine peace and voices for justice.

“Peace-making requires Mr. Trump and Israel’s leadership to respect their own humanity, and respect the humanity of Palestinian people, dealing with them on the basis of shared humanity…. Peace is made by people who want peace, who acknowledge that the other party is a human being with equal rights and dignity that was granted by God to all….Today we ask churches and Christians across the globe to stand up in the face of injustice against the Palestinian people and demand their countries to reject categorically the so-called ‘deal of the century’, reiterating that neither peace nor justice can prevail unless justice is fulfilled, occupation is ended, and Palestinians are granted their full rights.”

What You Can Do

1.     Pray for the people of Wadi Foquin and for all Palestinians and Israelis.
Ask God what you and your church are called to do in order to follow Jesus.

2.     Educate your congregation by inviting a representative from Friends of
Wadi Foquin to provide information and educational resources.

3.    Advocate by contacting your congressional representatives to let them know
your concerns about the proposed peace plan and that you represent a
different Christian voice for peace with justice.

4.   Organize a trip to the Holy Land to “come and see” for yourself and your
congregation