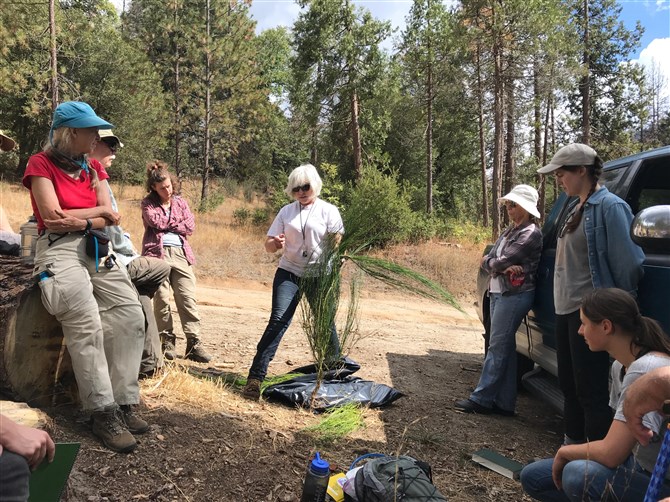 By Nancy Price
Under cloud-dappled skies on a brisk October morning, a handful of volunteers from Memorial United Methodist Church in Clovis gathered with members of the North Fork Mono Tribe and student volunteers from Berkeley, Vermont (by way of Monterey Bay) and Oregon in a Sierra mountain meadow near Bass Lake in Madera County.
Their task: To assist with the Crane Valley Meadow restoration, an ongoing project that began in 2003 and is a joint venture of the North Fork Mono and the Sierra National Forest Bass Lake Ranger District. The site is under archeological protection because it’s a cultural resource for deergrass, which has been used for basketry for centuries, said Ron Goode, a tribal elder who organizes the volunteer efforts.
Goode says the restoration work isn’t just helping to improve a Sierra habitat for critters and plants and to provide cultural resources for the Mono people. The restored 10-acre meadow acts as a sponge for rainfall and snowmelt, storing water that will eventually trickle downhill into Bass Lake, Willow Creek and finally into the San Joaquin River, running through Millerton Lake, past Friant Dam and across the Central Valley before emptying into the Delta near Stockton.
“In a sense, all we’re doing is setting the table,” Goode told the volunteers. “You come out here, you enhance the land so that water can hit the ground, so that water can be retained, so the water table does come back up. And then Mother Nature does her own thing.”
The meadow restoration was Memorial United Methodist Church’s latest project under the “Building Bridges” program that connects the Clovis church to Native American neighbors. In 2016 Memorial hosted a “Building Bridges” event that attracted more than 120 people, both Native Americans and church members.
Memorial’s outreach to Native Americans led to the most recent project, partnering with North Fork Mono and the U.S. Forest Service on the meadow restoration.
Memorial’s pastor, Janette Saavedra, explained, “For several years our congregation has invited the Honorable Ron Goode to join us for Native American Awareness Sunday. Each year we learn more, and our friendships are expanding. During the course of our worship last May I asked Ron, ‘What more can we do to support our Native America neighbors?’ Ron suggested we help with meadow restoration, and immediately members of the congregation took interest.”
Before the volunteers began their work in the meadow, they gathered around Goode as he said a prayer and sang blessing songs while facing each of the four compass points: north, east, south, and west. The song for Mother Earth and the Moon Song helped connect the volunteers with the spirits on the land, Goode said, letting the spirits know “we’re coming to be with them out here, that we’re coming out here to rejuvenate and restore life.” 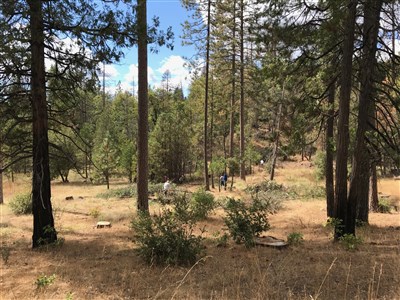 When the restoration project began, deergrass was starved of sunlight because the thick canopy of trees shaded the meadow. It also had become a dump site over the decades, so early clean-up efforts focused on removing debris that filled 10 truckloads, Goode said.
“When we first came out, I counted six cultural resources that we could use or harvest, be it Manzanita, deergrass, maybe the apple tree. But for the most part, we weren’t even getting acorns,” he said. “And now we’ve restored it so we are harvesting the deergrass, the acorns, the mint, the yarrow, there’s two or three different acorns, wild rose, sedgeroot, bracken fern, so many different resources.”
That day’s work included a survey of plants and animals by a Forest Service botanist, with assistance from volunteers. About 100 plant and animal species have been recorded at the site. “Today we found golden finches; we’ve never seen those before – and this might be the first time an eagle has flown over the top of us,” Goode said.
The site attracts American kestrel, bear, deer with fawn, turkeys, lizards and snakes, and “a mountain lion who brings his kill in every now and then,” Goode said. “We’ve got a fresh bone (today). 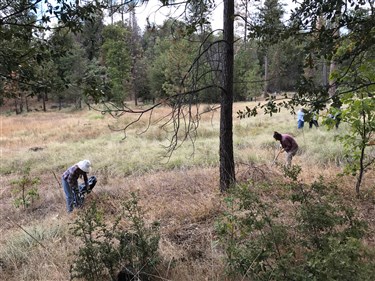 The volunteers spread out across the meadow, pulling out invasive plants, thinning some trees, and clearing brush. They also collected acorns, which the North Fork Mono use for cooking. The acorn crop was heavier than in prior years, Goode noted, even though volunteers scouring the ground beneath canopies of oak trees were instructed to discard any acorns with tiny holes in the shell.
Sierra Forest Supervisor Dean Gould, who stopped by during the afternoon to help out on the project, thanked the volunteers for putting their time and effort into the meadow restoration. More such projects are desperately needed on the forest’s 1.3 million acres, which have been scarred by drought, dead trees, and massive wildfires in recent years, he said.
Three of the forest’s most destructive wildfires, including the Ferguson Fire, occurred over the past five years, causing erosion that adversely affects the quantity and quality of groundwater, Gould said.
As the Central Valley’s population continues to grow, there will be greater demand for a natural resource that’s already in short supply, he said.
“With a dramatically escalating demand, and this decreasing supply in quantity and quality, you can tell the future. All you have to do is connect a few more dots, add a few more years, just draw the line on the graph a little further, and it’s going to be a train wreck. It’s going to be a huge, huge problem,” Gould said. “It is the proverbial shrinking iceberg. We can keep riding that iceberg until there’s nothing left, or we can take that leap off to that much better place.”
Gould said the future of Sierra National Forest will hinge on public support and assistance. He’s working toward building strategic partnerships as well as welcoming volunteer efforts such as the clean-up.
“You folks are part of that, not just with your work today, but more so about spreading the word about what’s going on here and the role folks can play in making a difference, and how serious it is,” he told the volunteers. “The health of the Sierra is inextricably linked to the vitality of the Central Valley. The majority of folks don’t understand that.”
The people of Memorial are planning to participate in more volunteer days for meadow restoration this summer and fall. Also, the congregation is beginning to plan another big “Building Bridges” event for the fall and hopes many congregations will plan to attend. If you would like more information about these activities, please call the church office at 559-299-4615.
Nancy Price is a Memorial United Methodist Church member and a Central Valley journalist.
(You may want to also read: Creation Care Chair Wants to Raise Consciousness ... from Holston Conference of The UMC.)