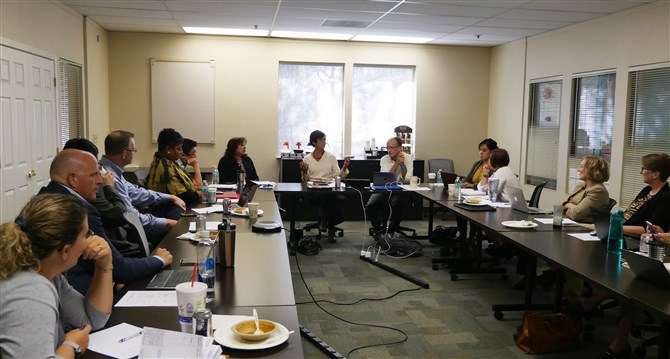 “We felt there was good connectional, authentic conversation there,” chairperson Kathi McShane reported at the Saturday (Oct. 26) meeting of the conference Core Team, referencing listening sessions at the 2019 Annual Conference Session that the Core Team planned and coordinated.
Afterward, “We compiled and reviewed comments and distilled them into themes and values,” she continued, “which made their way into Listening to Your Church’s Voice.”
Listening to Your Church’s Voice is a project in which churches have been asked to complete a brief questionnaire by December 31st.
“The idea is that in charge conferences we are testing what we heard in the episcopal visits [that followed the February 2019 special called General Conference] and the listening sessions at [ACS],” McShane said. “We have designed three prompts to find out if we heard correctly.”
The Core Team is a body comprised of 11 voting members nominated by the Conference Committee on Nominations and Connectional Leadership Development and elected by the annual conference, with non-voting participation by the bishop, members of extended cabinet, and a representative from the Council of Finance and Administration (CFA). Its purpose is to oversee implementation of the mission and vision of the conference, follow up on decisions made at the annual conference session, and collaborate on aligning resources, among other functions. [See Standing Rules, Division IV, Section D. 5. j.]

It currently is engaged in facilitating a foundational process for arriving at a Vision and Strategic Plan for the conference for the 2021-24 Quadrennium.
Strategic planning currently is in the discernment phase, McShane said.
After gathering and analyzing data from “Listening to Your Church’s Voice,” the team will create a first draft of a Vision and Strategic Plan in the first quarter of 2020, collect additional input from circuits, and revise the plan in the second quarter. Then, after obtaining more feedback at district conferences, the team will further refine the document and present it to the 2020 Annual Conference Session (ACS).
“If all three [values] are affirmed, are we going to try to do all three?” asked Gwen Bortner.
“I think so; I think in a four-year strategic plan we can address all three,” McShane replied.
Reaction to the “Listening” process from churches has been generally positive so far, district superintendents (DSes) told the Core Team.
“I have found nothing but willingness and some energy about it; no resistance so far,” reported Central Valley DS Debra Brady.
“The churches where I’ve led this conversation, they’ve thanked me; they really feel their voices are being heard,” added Shinya Goto, DS for El Camino Real.
The Core Team acknowledged that the wisdom of engaging in strategic planning, given the uncertainties surrounding the future of The United Methodist Church, has been questioned by some.
But while agreeing that “while this planning process occurs, it must be acknowledged that the very nature of The UMC is being redefined,” Rev. Craig Brown, executive director of congregational development, added, in a document outlining the strategic planning process, “Regardless of the outcome at the 2020 General Conference, the work of the annual conference must proceed based on the ... values that this annual conference has clearly established. The Core Team’s planning for 2024 must assume and continue to enrich these values.”
“Are we looking into the possibility of denominational change seriously? How could we not be?” Rev. Jorge Domingues, executive director of connectional ministries, asked rhetorically. “How could we be looking at structural change without considering that the denomination could change?”
Domingues reported that five churches had already completed their Listening to Your Church’s Voice surveys.

At the 2019 ACS, members adopted Item 12, Recommendation on Creation of a California-Nevada Structural Change Task Force to “investigate various proposals” for structural changes to the denomination. Item 12 specifies that the 15-member task force is to include “seven lay and seven clergy members, who are broadly representative of the geographic, ethnic/racial, and theological diversity found in the annual conference. At least one-fourth of the members of this Task Force shall be LGBTQI+ persons, at least one member shall be a youth or young adult, and [the Task Force] shall include one member each from the Council on Finance and Administration, Conference Board of Trustees, and Conference Board of Pensions.”
Structural Change Task Force members will be appointed by McShane and the co-chairs of the 2020 General Conference delegation, Micheal Pope and Rev. Jeffrey Kuan – with Domingues working with them in an ex-officio capacity. Invitations to potential members were being sent out over the weekend, Bishop Minerva G. Carcaño said.

Bishop Carcaño is asking Cal-Nevadans to be in prayer for the Western Jurisdiction Fresh United Methodism Summit, taking place November 14-16 at Rolling Hills UMC in Los Angeles. Some 30 people from this conference will attend, many of them participating. Portions of the event will be streamed live.
The summit will begin with 10-minute reports from each annual conference and several WJ workgroups, with attendees urged to listen for areas of alignment and opportunity so that conferences within the jurisdiction can collaborate for broader impact. Then, participants will go through a process of envisioning and innovation around the next steps for the Western Jurisdiction and The United Methodist Church.
The summit will be live streamed on the Western Jurisdiction website, http://westernjurisdictionumc.org/wj-events/fresh/. Watch for information to be posted about broadcast times.
comments powered by Disqus
News