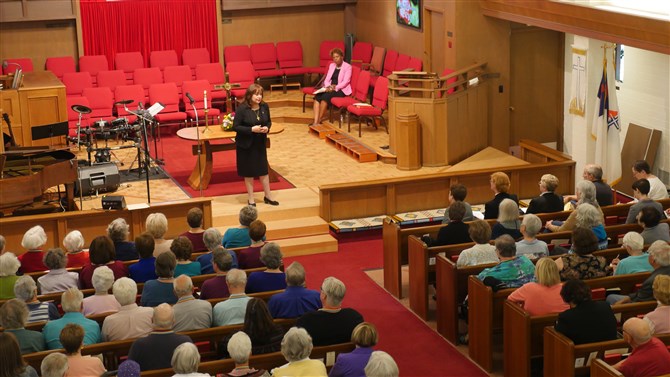 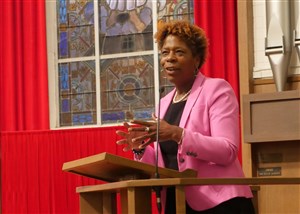 “Are you a Methodist?”
YES!
“Are you a Christian?”
YES!
“Are you a disciple?”
YES!
The rallying cry from Conference Lay Leader Micheal Pope (right) and its attendant enthusiastic response concluded the speakers’ remarks as Bishop Minerva G. Carcaño wrapped up a grueling schedule of 12 Post-General Conference Episcopal Visits that included stops in each district of the California-Nevada Conference and covered some 1,300+ miles. The visits began at Los Altos United Methodist Church on March 3, just after the conclusion of the 2019 Special Called General Conference of The United Methodist Church, and ended Tuesday night (April 30), at First UMC of Santa Rosa. 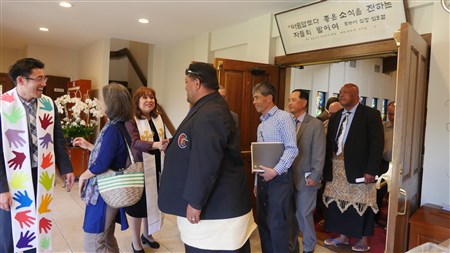 In the final seven days of April the bishop made a visit to each of the districts in succession, speaking at Tulare UMC (Central Valley District) on April 24; both Korean UMC of Santa Clara Valley (El Camino Real District) and Temple UMC (Bay District) on April 28; Eureka UMC (Great Northern District) on April 29; and finally FUMC Santa Rosa (Los Rios District).
On each of the 12 visits the bishop and a team of delegates and observers who had attended the special session – the speakers varied at each venue – detailed what occurred at the historic session and offered personal reflections and analysis.

At each stop Bishop Carcaño offered several key points, and did not depart from her core message in the wake of the Judicial Council ruling last week that affirmed some elements of the Traditional Plan passed by General Conference, as well as the disaffiliation petition that the legislative body also approved. 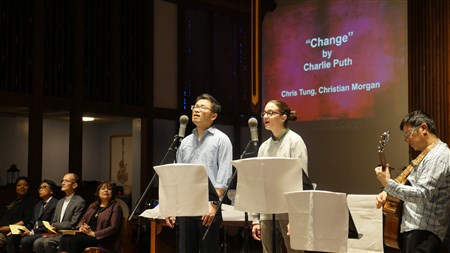 She maintained that The United Methodist Church has sinned, in choosing to exclude LGBTQIA persons from full participation in the life of the church; that she expects Cal-Nev churches to actively reach out to those persons who have been harmed by the actions of the General Church; and that, likewise, she expects progressives in the conference to ensure that those with a more conservative theological perspective do not feel ostracized.
The bishop also asserted that the California-Nevada Conference has been living the One Church Plan – in which people who faithfully hold differing views can worship and practice according to their conscience, within the same conference – for many years. And in no uncertain terms, she called for resistance to “the sin of exclusion.”
More than 2,000 persons from around the conference attended the Episcopal visits, including 260 at Santa Rosa.
JB Brayfindley contributed to this article.
Photos: FUMC Santa Rosa, Cate Monaghan; Korean UMC and Temple UMC, JB Brayfindley.
comments powered by Disqus
News