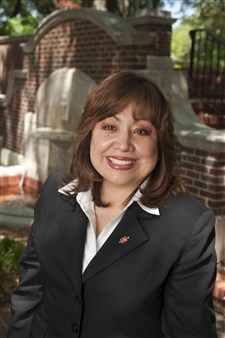 In 2004, Bishop Minerva G. Carcaño became the first Hispanic woman to be elected to the episcopacy of The United Methodist Church, the second-largest Protestant denomination in the U.S. Today, she is one of 69 active bishops leading more than twelve million members of her denomination worldwide. She currently serves as Bishop of the San Francisco Area of The United Methodist Church, and is an official spokesperson for the United Methodist Council of Bishops on the issue of immigration. Bishop Carcaño is a graduate of the University of Texas Rio Grande Valley and Perkins School of Theology of Southern Methodist University.

In her ministry she has pastored churches in Lubbock, Crystal City, Carrizo Springs, Hebbronville and McAllen, all in the state of Texas.   She pastored a church in San Jose, California, and served as the organizing pastor of the ecumenical South Albuquerque Cooperative Ministry in Albuquerque, New Mexico.  She also served as the chaplain of the former Holding Institute, a United Methodist secondary school in Laredo, Texas.  In 1986 she became the first Hispanic woman to be appointed a United Methodist district superintendent, serving in that capacity in West Texas and New Mexico until 1992.   After superintendency, she served as the Director of the Mexican American Program at Perkins School of Theology.  In 2001 she was invited to serve as the Superintendent of the Metropolitan District of the Oregon-Idaho Conference, in Portland, Oregon.  She was serving in this latter appointment when she was elected to the episcopacy.

A native of Edinburg, Texas, Bishop Carcaño spent her early years aspiring to make a difference in the lives of persons who faced poverty and discrimination. Not forgetting her roots and early hopes, her ministry has always involved work with the poor, farm workers, immigrants, refugees, and those advocating for the full rights of the LGBTQ community. Deeply committed to ecumenism, the strengthening of interfaith relationships, and contextual ministry, she encourages congregations to work ecumenically and in partnership with communities of other living faiths and to be active in community organizing. She serves on the boards of the Industrial Areas Foundation Southwestern region and The California Endowment.  She is also an Auburn Fellow.

Bishop Carcaño is married to Mr. Thomas L. Spaniolo, a lawyer who practices immigration and criminal law.  They have a daughter, Sofia Teresa Spaniolo-Carcaño, who lives in Chicago and works in the fashion industry.