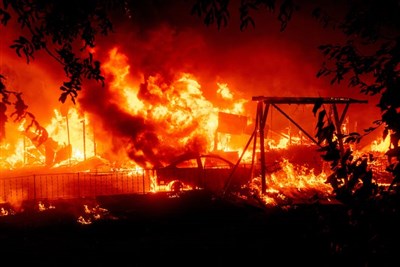 “The stories are heartbreaking,” stated Stephen Elliot, member of the Early Response Team (ERT) of the California Nevada United Methodist Disaster Response Ministry. Two days after finishing up work with survivors of the CZU Lightening Complex Fires in Santa Cruz County, he was enlisted to work with survivors of the North Complex Fire near Oroville. “This is our second United Methodist response to Butte County fires. We served during the devastating Camp Fire in 2018 that destroyed the town of Paradise… and now this fire in the Lake Oroville area.”

The ERT, activated since September 2nd, has served survivors of both the CZU fire and the North Complex fire near Oroville and continues to be available across the north state.

On September 22, Butte County opened a Local Assistance Center (LAC) to assist those impacted by the North Complex Fire and requested the CNUMC ERT to participate. The fire had been started by lightening on August 17 and has burned 318,930 acres, killed 15 people and destroyed or damaged 2,455 structures. It is currently at 95% containment.

“We helped sift ashes for one lady, Lori,” stated Elliot. “Her husband had died several years ago. She had survived breast cancer. Now, she loses her home that she had just moved into a few months ago, after four years of construction.”

Elliot recalled how a deaf woman was rescued by neighbors as the fire approached and another man awoken by his dog. Two married firefighters lost their home which on duty at another fire. One man was living in his car. Others were “fire nomads” living in RV’s and drove out.

“And there was the mother whose daughter had lost her home in the Camp Fire,” said Elliot. “…and now her son loses his home in this fire.”

Over a two-week period, the ERT assisted 360 households in Butte County by offering hygiene kits, grocery gift cards, giving away PPE clothing and tools to search the ashes of homes, and cleaning supplies for those who only had smoke and soot damage to their homes.

“Most importantly, our teams provide spiritual and emotional support,” said Edd-Bennett. She encouraged all United Methodists to join in prayer together to support everyone involved. “And we can all pray--for those whom the fire was tragic that God give them the strength to endure; for those who are first to respond, that in God they have the strength of generosity; and for those volunteering through churches, through God they act in faith which shows hope to the world.”

Find information on how you and your church can make a difference in current and future disasters, visit the Disaster Response Ministry webpage at cnumc.org/disasterresponse. Currently, there is a need for more Wild Fire buckets. Instead of sending the supplies to UMCOR in Utah, Edd-Bennett has located several churches throughout our conference willing to house the equipment for immediate access. Contact WilliamE@calnevumc.org to find the closest donation location in your area.

“Though many of the ongoing fires are moving toward recovery and people are returning to the area after being evacuated” stated Sonja Edd-Bennett, director of the CNUMC Disaster Response Ministry, “the work of the United Methodist Church continues.”

Click here to access the Disaster Response Ministry page and find out how to give and get involved.