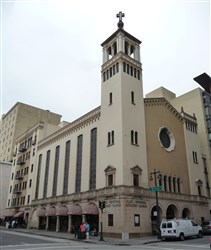 The California-Nevada Conference of The United Methodist Church has a long-standing commitment of support for Glide Memorial United Methodist Church’s work with the poor and vulnerable of the Tenderloin District and the greater San Francisco community.  The Conference’s commitment of support for this work stands today.  The concerns that I and the leadership of the California-Nevada Conference have are related to the church life of this congregation.

While there is a remnant of those who claim to be United Methodist and thus Christian, the great majority of the participants at Glide’s Sunday Celebrations claim other faiths such as Jewish, Buddhist, Muslim and Wiccan.   Atheists and Agnostics, comprise another segment of the Glide community. Leaders from these constituencies are quick to publicly state that they do not want the Celebrations, or the church, to be United Methodist or Christian in any form.  Sunday Celebrations are uplifting concerts, but lack the fundamentals of Christian worship.  Baptisms are conducted periodically but in the name of the people rather than from a Christian understanding of Baptism.  Holy Communion was done away with some time ago and only introduced back into the life of the congregation this past Spring, but outside of the Celebration gatherings and with much resistance.   We seek to be in good and loving relationship with persons of other faiths and beliefs, and those who claim no faith.  However, this should never cause us to lose our own faith.

There are also serious concerns about the governance and financial administration of the church. The church has no organizational structure to fulfill its responsibilities as per The Book of Discipline, and has not had a United Methodist organizational structure for decades.  The only body that functions in any leadership capacity is a group of congregational leaders hand-picked by Cecil Williams who have never been elected or recognized by the congregation.  The district superintendent and I have worked with this congregational leaders group and have found them on the whole to be thoughtful and helpful, but without authority to act on behalf of the church.  The secular Glide Foundation Board makes all decisions related to the work of the Foundation and the church, and now seeks to determine who Glide’s pastor(s) will be.  There has not been a church conference at Glide on record for many years.

Cecil Williams retired in 2000 yet continues to act as the senior pastor.  Since Williams retirement, the following have been appointed as senior pastors of Glide:  Doug Fitch, Don Guest, Karen Oliveto, and Jay Williams.  In addition, Theon Johnson III and Deacon Angela Brown have served in associate positions.  When Karen Oliveto was elected to the episcopacy in 2016, Bishop Warner H. Brown Jr. served as the interim senior pastor through June 30, 2017.  No pastor has been allowed to exercise their rightful authority or responsibilities while serving at Glide.  To this day, Cecil Williams and his wife, Janice Mirikitani, make all decisions in the background at Glide.

On June 22, 2018, I received a letter from Kaye Foster, Glide Foundation Board Chair, challenging my work in relationship to the Glide Church.  It included a number of misinterpreted paragraphs from our Book of Discipline.  What was most significant, however, was that lawyers Stephanie Petit and Daniel P. Dalton were copied.  Daniel P. Dalton is from Dalton and Tomich, a law firm that has been representing conservative United Methodist churches seeking to break away from the denomination because they oppose the full inclusion of LGBTQ persons.  According to their own website, they have done similar work with Episcopal and Presbyterian USA churches and now make themselves available to work with United Methodist churches.      My Cabinet and I with the counsel of our Conference Chancellor have decided to conduct an assessment of Glide Memorial United Methodist Church under disciplinary paragraph 213.  We ask for your prayers for this process and invite you to fast with us, as you are able, on Sunday mornings till noon during the summer months.  May God give us wisdom and love in all things.   Sincerely,