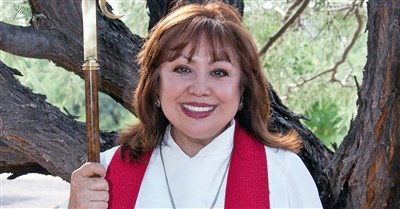 I remember the first time I visited Wesley’s Chapel in London, England.  It was a cold, rainy day in the month of November.  After I visited the chapel and the Museum of Methodism, I went and sat by Wesley’s tomb in the garden at the rear of the chapel.  I was on my way to Harare, Zimbabwe to attend an assembly of the World Council of Churches and rather than sit for a day at the airport, I decided at the last minute to visit the mother church of Methodism and John Wesley himself.

As I navigated my way to Wesley’s Chapel, I was so very aware of a deep desire in my heart to be at this place while also preparing to be viewed as an outsider.  I am a third generation Methodist, but to this very day am reminded by other Methodists that I am not quite a member of the family, the color of my skin, my gender, my commitment to serving the poor, the marginalized, the excluded, and breaking down the institutional barriers that contribute to and often cause their suffering, making me suspect.

When I finally arrived at Wesley’s Chapel, I did not identify myself as a United Methodist and certainly not as a clergyperson.  But it did not matter.  I was welcomed as if I were a family member!  Allowed to roam the chapel and the museum and the grounds as if they were mine.

When I figured out that I did not have enough local currency to return to the airport, the superintendent minister, the leading pastor of Wesley’s Chapel, insisted on walking several blocks down the street in pouring rain to a bank to exchange US dollars for me.  And he still didn’t know I was a Methodist!

Five years later I would meet him in the US and tell him of how he had graciously helped me on my visit to Wesley’s Chapel.  He didn’t remember.  I suspect he did things like this often.

Before leaving Wesley’s Chapel I sat on a bench by John Wesley’s tomb.  As I sat there in the drizzle of rain that persisted, I felt like I was home.  I had a conversation with Mr. Wesley, who on that afternoon became a heart-to-heart mentor to me, a spiritual guide, a friend on the journey of life and faith.  What I had learned over the years in my studies of Methodism and of its founder, John Wesley, became real to me on that day in a most unexpected way.

As I left that garden at Wesley’s Chapel I touched the plaque with John Wesley’s famous quote, “The World is my Parish,” and in my spirit spoke a word of witness to John Wesley.  I was part of the world that had been welcomed into the parish of God’s grace and mercy, justice, and love, by Wesley’s own faithful service to Christ Jesus!

I am so thankful to God for being a Methodist.  Since I can remember from my own upbringing as a Christian in the Wesleyan tradition, being a Methodist has always been about welcoming, serving, caring for others, and sharing the good news of Jesus the Christ with others, without judgment, full of the unconditional love of God.  I have learned along the way that to be such a people depends on our giving ourselves fully to God, over, and over again.

John Wesley prayed that we might be such a people encouraging Methodists to renew their covenant with God at the beginning of every year.  As we begin this New Year, I invite us to pray together the historic prayer that Methodists have prayed at the beginning of a new year, from generation to generation since 1780.  May this contemporary version make it accessible to all of us.

I am no longer my own, but yours.
Put me to what you will, place me with whom you will.
Put me to doing, put me to suffering.
Let me be put to work for you or set aside for you,
Praised for you or criticized for you.
Let me be full, let me be empty.
Let me have all things, let me have nothing.
I freely and fully surrender all things to your glory and service.
And now, O wonderful and holy God,
Creator, Redeemer, and Sustainer,
you are mine, and I am yours.
So be it.
And the covenant which I have made on earth,
Let it also be made in heaven.  Amen.