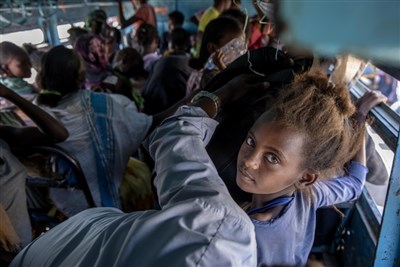 Editor's Note:  The LA Times featured the following OP-Ed by Bishop Minerva G. Carcaño on April 16th as the Biden administration announced it would keep the cap on refugees to the Trump era policy of 15,000, effectively breaking its promise to raise the cap to near 60,000. Bishop's op-ed was commissioned by Church World Service in anticipation of the cap rise by the Biden administration.  Bishop's op-ed is reprinted in full here. Click here to read the op-ed in the LA Times.

I will never forget the little girl from Pakistan who, with her parents, was resettled in this country with the help of one of our United Methodist congregations.

Aaima and her family were attending a Sunday service in 2013 at All Saints Church in Peshawar, Pakistan, when terrorist bombs exploded at the site, killing her two older siblings and her grandmother, along with many church members. This family had faced a life of persecution for being part of a religious minority even before that horrific tragedy.

Their resettlement in Claremont gave them a chance to build a new life. They quickly became involved in the church that welcomed them. While the church supported them in their resettlement, Aaima — the most joyful and loving spirit — and her family brought renewal to the church, teaching us about courage, faith and love. Under the Trump administration, however, this mutual gift was rejected and nearly destroyed.

Over four deeply painful and divisive years, President Trump did his best to dismantle a 40-year-old federal program and a longstanding commitment to welcoming refugees to the United States. By his last year in the White House, his administration had reduced the refugee resettlement admissions goal to 15,000 a year — a historic low, down from an average admissions goal of 95,000 a year.

This is a reflection of our abysmal commitment to refugees. It leaves thousands of families and children like Aaima abandoned in life-threatening circumstances, stranded in refugee camps, and forgotten in a global pandemic. Millions of refugees are in desperate need of protection and hope.

President Biden has spoken to that hope by announcing his commitment to reinvigorate the refugee resettlement program. His administration has said it would raise the resettlement goal in its first full fiscal year in office to 125,000 and proposed increasing the current year’s goal to 62,500.

But despite that promise, the president on Friday signed a new presidential determination leaving the refugee admissions goal for the remainder of this fiscal year at 15,000. While he did remove several harmful resettlement categories, his order will leave many refugees who have been vetted and approved to travel to the United States in harm’s way. After receiving immediate criticism, the White House said it would increase the cap next month, but did not give details.

People of faith and goodwill in this country stand ready to help those who face violence and death and see America as their chance for safety and a real future. But none of this will happen unless the Biden administration quickly lifts the cap and opens the door to more refugees waiting in line.

Worldwide, nearly 80 million people have been displaced from their homes. Of those, 29 million — half of whom are children — are refugees who have been forced out of their countries and need a safe, permanent home. Many have been subject to vicious persecution because of their race, religion, nationality, membership in a particular social group or their political opinion. The Holocaust, the Rwandan and Cambodian genocides, the civil war in Syria, the political instability in Myanmar, and other moments of life-destroying violence, continue to teach us how critically important it is to protect those fleeing from oppression and tyranny.

The United States was once recognized in the world for extending protection to refugees, but our moral leadership on this front has been lost in political warfare and the rise of white supremacy, white nationalism and xenophobia, all emboldened by Trump. It is time to reclaim America’s moral voice.

Over the last year, communities of faith across the country have encouraged local and state officials to register their commitment to serving refugees. In August, 540 state and local elected officials from all 50 states came forth to state their support for refugee resettlement in their communities.

The opportunity to save lives, extend hospitality to new neighbors, and invite new members into our churches, synagogues and mosques, renews our own spirits with hope in the restoration of life.

As Christians, we believe that in welcoming the refugee we are fulfilling the work of our faith. I hope that Biden acts on the immediacy of this need and makes the spirit of welcome his guiding principle.