Bishop Minerva G. Carcaño is a third-generation Methodist.  She felt a call to ordained ministry as a child.  Working alongside her father as he replaced the vinyl flooring in her church’s kindergarten classroom, she felt God swoop in and embrace her with perfect love and her heart filled with incredible joy.  From that moment on she sought to live in God’s house. 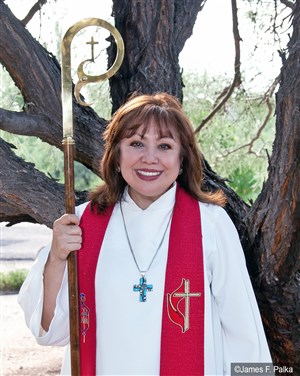 Active in the church all her life, Carcaño has served as a United Methodist connectional leader since her youth.  Her service in the church has included board membership on the former Board of Education, as well as on the General Boards of Global Ministries, Church and Society, the United Methodist Publishing House, the Commission on Christian Unity and Interreligious Concerns, the Commission on Religion and Race, the board of the United Methodist Higher Education Foundation and the International Clergywomen’s Consultation. She presently serves on the board of the General Council on Finance and Administration, and the board of trustees of Africa University.

In the over 44 years since her ordination, she has served as a pastor, a chaplain, a lead organizer of an ecumenical parish, twice as a district superintendent in two different annual conferences, as a seminary program administrator and adjunct faculty member, and as a bishop.

Bishop Carcaño serves on The California Endowment Board of Directors, the Council on Foreign Relations Religious Advisory Committee, and the Southwest Industrial Education Fund Advisory Board of the IAF.   She has served on the New Mexico Council of Churches, Ecumenical Ministries of Oregon, Arizona Ecumenical Council, and the Los Angeles Council of Religious Leaders.

She is a recognized immigrant rights advocate and was a member of the founding class of the Auburn Senior Fellows.  She has published articles on the rights of migrants in the Huffington Post and The Hill and has testified before the U.S. House of Representatives Judiciary Subcommittee on Immigration and Border Security.  Carcaño has also long been an advocate for the full rights and inclusion of LGBTQIA+ persons joining her efforts to the work of such organizations as the Human Rights Campaign.  She collaborates with the work of the Children’s Defense Fund and has participated in leadership dialogues around immigration and refugee concerns at the Center for American Progress and the Brookings Institution.

A resident of Sacramento, California, Bishop Carcaño earned her Bachelor of Arts in social work from the University of Texas Rio Grande Valley and her Masters of Theology from Southern Methodist University’s Perkins School of Theology.  Both schools have recognized her as a distinguished alumna.   Claremont School of Theology granted her an honorary Doctor of Divinity degree for her work and teachings on social justice.

She has been honored with the New Mexico Council of Churches Turquoise Award, Order of the Sisters of Loretto’s Mary Rhodes Award, Auburn School of Theology’s Lives of Commitment Award, the Arizona Interfaith Movement’s Golden Rule Religious Award, the Coalition for Humane Immigrant Rights of Los Angeles’ Women Leading Change Award, the Leadership Award of the Los Angeles United Methodist Museum of Social Justice, the Long Beach Filipino Migrant Center’s Freedom Fighter Award, the Scarritt Bennett Center’s Ann L. Reskovac Courage Award, the Southern California Ecumenical Council’s Gene Boutilier Award for Distinguished Ecumenical Service and recognized as a Giant of Justice by CLUE of Los Angeles.  A water station in the Sonoran Desert bearing Bishop Carcaño’s name was placed there by the Humane Borders organization in recognition of her efforts to save the lives of immigrants crossing this treacherous land seeking life and hope.  Recently she was recognized with the Moral Courage Medallion of the Baltimore-Washington Conference of The United Methodist Church.